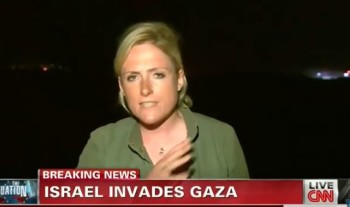 CNN apologized after a correspondent called a group of Israelis “scum” in a tweet.

The network also pulled the same reporter, Diana Magnay, from covering Gaza. Her punishment is she will now cover Moscow, according to the Huffington Post’s Michael Calderone.

A group of Israelis cheered and threatened her, according to CNN and Magnay.

“After being threatened and harassed before and during a liveshot, Diana reacted angrily on Twitter. She deeply regrets the language used, which was aimed directly at those who had been targeting our crew. She certainly meant no offense to anyone beyond that group, and she and CNN apologize for any offense that may have been taken.”

Her tweet and her mild punishment, if covering Moscow can be called that, was that her name calling was confined to those threatening her and not meant to “anyone beyond that group.” The apology statement suggests that the people who were threatening her can feel free to be offended. We’re asking CNN for clarification and if it’s OK to call people acting in an offensive manner scum.