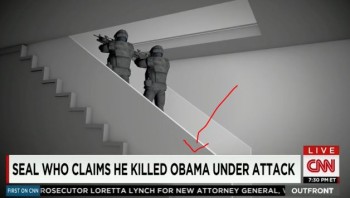 CNN mixed the two up in a chyron (on-air headline) used with a report on the Navy SEAL who says he shot Osama bin Laden back in 2011, Mediaite reported.

The chyron read: “SEAL who claims he killed Obama under attack.”

According to Mediaite, which posted a video clip of the error, CNN quickly corrected the chyron.