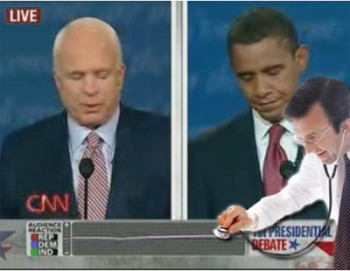 Can't CNN Leave Gismos Alone? Every time I looked at the "Audience Reaction" meter during the debate, it was flat-lined. Were these candidates dead men walking? The sciencey look of the graphic,  you must admit,  has an appealing truthiness.

MyChances.net asked, “Anyone have any idea how the little scrolling ‘Audience Reaction’ is measured? CNN has one trend-line for independents, republicans, and democrats, and I’m not sure where they’re getting those numbers.”

Speculation abounded on the Web. SteveK on Media Bistro agreed that the meter “is fairly difficult to decipher.”

At Yahoo! Answers, Austin M said, “CNN has chosen 3 audience members to give their reactions to CNN by giving them through a pulse machine. This is possible by seeing their pulse and looking at how it rises and lowers based on the questions asked. Also, those same people have a handheld device where they press 1 of three buttons meaning plus a little, minus a little, or back to neutral. (Used after each question.) Hope this helps.”

Not really, Austin, but thanks.

Dennis left a comment on MyChance.net ” with this CNN link which gives a partial answer: ‘ Voters watch the debate from Columbus, Ohio, and give their reaction to the responses in real-time.’ But how this is done is not clear; nor is it stated how they gauge who is republican, democratic, or independent (presumably self-identification).”

Even the Wall Street Journal ‘s  “Numbers Guy” couldn’t enumerate–literally. He wrote, “Beneath the candidates, reaction from 32 undecided focus-group members in Ohio was presented graphically rather than numerically…reaction, positive or negative, was displayed as a rising or falling line.”

The answer was from Ernanio was the best: “They have a bunch of potential voters from OHIO seated in a room with a dial thingamajig on their hands that when rotated can go from 0 – 100 to show how much they are liking the candidates intervention.”

So what does CNN News say?

I wrote to Edie Emery, in media relations at CNN, seeking answers. She kindly e-mailed me CNN’s press release. It explained (emphasis mine):

“CNN special correspondent Soledad O’Brien will moderate a focus group in Columbus, Ohio. The group will be comprised of a selection of voters from the hotly contested state. During the debate, the participants will operate electronic dial testers that will allow television viewers to see the group’s reactions in real time.”

I still had questions so I wrote back to Ms. Emery. I stated, “Bloggers comments reflect confusion over what exactly the audience reaction meter was doing… Since your Ohio focus group participants were concentrating on what was being said, it was likely difficult for them to remember, on an ongoing basis… to take an extra physical step and actually spin the ‘dial.’ This may explain why very little action (movement in the wave form) was apparent.”

I continued, “From my view, it had the opposite effect as a laugh track. Instead of energizing the viewing experience, it felt like looking at dying patient’s vital signs — flatlined. I kept looking for reactions that were mild at best. This was especially true when combined with the enforced audience silence.”

Would automatic, instead of manual, measurements of reactions be any better?

I think Austin M, cited above, maybe had the right idea. At least an automatic measurement — like a pulse– would be much more accurate and objective. And it would be a measurement of something real.

But even so, absent an on-screen notice of what is being measured, the occasional and smooth waves only remain a meaningless distraction, not an enhancement of debate. The flat lines encourages viewers’ feelings, and maybe even provides physical evidence, that the whole debate isn’t registering much reaction — of er, whatever the heck it is measuring.

We viewers know what most of the on screen gismos mean on the TV screen. However, due to the importance of the presidential debates, CNN producers should realize now is not the time to be experimenting or ramping up empty calorie polling technology. After all, viewers on the web had no idea — even after researching the CNN site — why they were starring, like a deer in the headlights, at the paradoxically, compelling lack of activity in three wave form lines.

Let’s face it , the CNN “Audience Reaction” meter’s flat lines kept communicating to viewers throughout the debate that the candidates and the wired audience was less than excited about what was being said. I only hope CNN News producers will successfully re-think this dubious polling “invention” before the next debate – and resist any impulse for anymore new on-screen gismos.

It turns out that the CNN gismos are called “Perception Analyzer Dials,” and the concept was sold to CNN by two Southern Methodist University (SMU) professors, Rita Kirk and Assistant Professor Dan Schill.

Patricia Ward , SMU Magazine, wrote that the professors’ studied “how the public uses blogs, social networking sites and other online tools.” The “idea of giving voters a voice in network coverage through real-time response focus groups” came to them during their research.

Following the vice- presidential debates, we will be able to report on any changes CNN makes in the wave form display. Hopefully, the “do not resuscitate” order has been lifted for Thursday’s debate between Palin vs. Biden.

What was said on CNN before the debates about the meters?