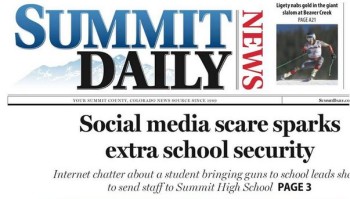 Summit Daily, a free daily newspaper with a reported 12,000 circulation, commented in a recent editorial that “it is a concern to us, as well as newspaper publishers and editors across the state, that the main institution for training journalists in Colorado is looking to make sweeping changes to its school of journalism and mass communications.”

Further, the newspaper stated that it was joining in agreement with the Colorado Press Association’s resolution:

“It is hereby resolved to encourage the continuation of the school of journalism at the University of Colorado, Boulder campus. It is further resolved that this continued program should adhere to the principles of journalism we have come to expect that include training in fair, accurate, objective, timely and complete journalism.”

Summit Daily argued the journalism school still holds importance because the Internet makes it “difficult if not impossible” to find unbiased, original information.

However, Univ. of Colorado chancellor Philip P. DiStefano wrote in a recent post for ColoradoDaily to “clarify” that the proposals aren’t to “end” the journalism school, but rather to “pair journalism studies with ‘content-rich’ majors.”  DiStefano noted that the plans are indeed to eliminate a degree with a single major in journalism, but not to “end” journalism at CU-Boulder.