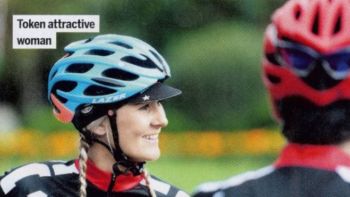 A British cycling magazine described a woman bicyclist as “token attractive woman” in a photo caption. After the caption fail was shared on Twitter, the magazine, Cycling Weekly, apologized for the “idiotic caption” that wasn’t “funny,” the Guardian reported.

Tweeter Carlos Fandango posted an image of the magazine on Twitter, writing “my clicking club made it into @cyclingweekly and this happened. I hope @cyclingweekly apologise.” He added that there is “still a lot of equality work to do.” In a later tweet, Fandango wrote that the woman pictured felt “extremely extremely offended, upset and felt belittled.”

Later that day, the magazine tweeted an apology from editor Simon Richardson. The apology was published on the Cycling Weekly website. iMediaEthics has written to Richardson to ask if the staffer responsible has been disciplined and if the magazine will publish an apology in the next edition.

“In this week’s issue of Cycling Weekly we published a regular Ride With feature with the Hinckley Cycling Race Club in Leicester. Unfortunately during the magazine’s production process a member of the sub-editing team decided to write an idiotic caption on a photo of one of the female members of the club.

“The caption is neither funny nor representative of the way we feel or approach our work. Sadly in the rush to get the magazine finished it was missed by other members of the team and eventually sent to print.

“We would like to apologise unreservedly to the ride in the photograph, the Hinckley CRC and all our readers. This appalling lack of judgement by an individual is just that, and not a reflection of the culture in the CW office.”

iMediaEthics wrote to the Hinckley Cycling Club in Leicester about the incident. Secretary Tim Ellershaw told iMediaEthics, “Yes, we have received a formal apology from the magazine and we consider the matter closed.”

“I have been in contact with the magazine editor throughout the day. He has explained how the error occurred and how it has been dealt with. We believe him to be sincere in his explanation and in his apology.  We do not believe this is indicative of any endemic sexism in their organisation and that this is an isolated incident.

“We obviously feel the caption used is unacceptable, and the person it referred to was disappointed to be referred to in this way rather than be applauded for her efforts as a cyclist.  This feature was a big deal for our Club and part of our 70th anniversary celebrations. We were all looking forward to seeing the article in print. This problem has overshadowed what should have been an exciting time for the Club.”