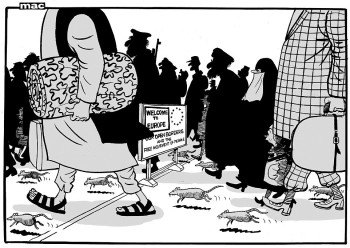 The Daily Mail cartoon in question.

Readers are not happy with the Daily Mail over an anti-refugee editorial cartoon that has been compared to Nazi-era propaganda.

The Nov. 17 cartoon by “Mac” (aka Stanley McMurtry) shows a woman wearing a hijab, men with big noses and chins — one with what appears to be a prayer mat and another with the outline of a gun, and rats crossing the border. The sign? “Welcome to Europe:  Open Borders and the free movement of people.”

See the cartoon below. 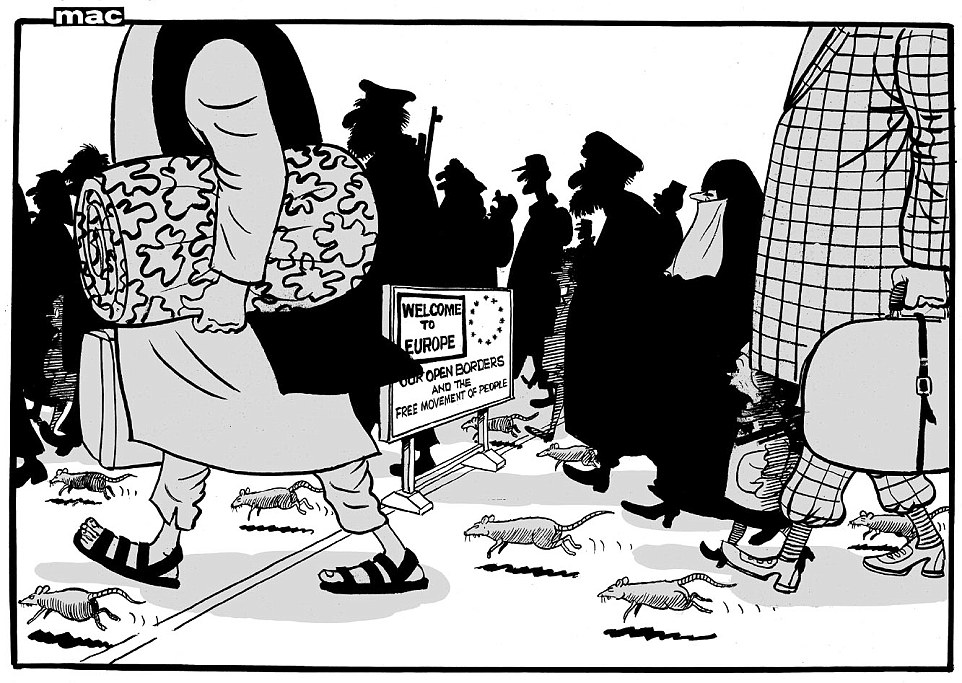 The Guardian explained the “history of an incendiary cartoon trope” — using rats. “From early 20th-century US scaremongers to Nazi propagandists, there is a long tradition of cartoonists depicting their targets as vermin but not everyone believes a recent Daily Mail cartoon was racist,” the Guardian wrote.

The cartoon has been linked to two Nazi-era cartoons, the Huffington Post and New York Times noted.

“Soon after The Daily Mail published Mac’s cartoon, Internet commenters linked it to this work, published in a Viennese newspaper by the name of ‘Das Kleine Blatt‘ in 1939,” the Huffington Post reported. See that cartoon below. 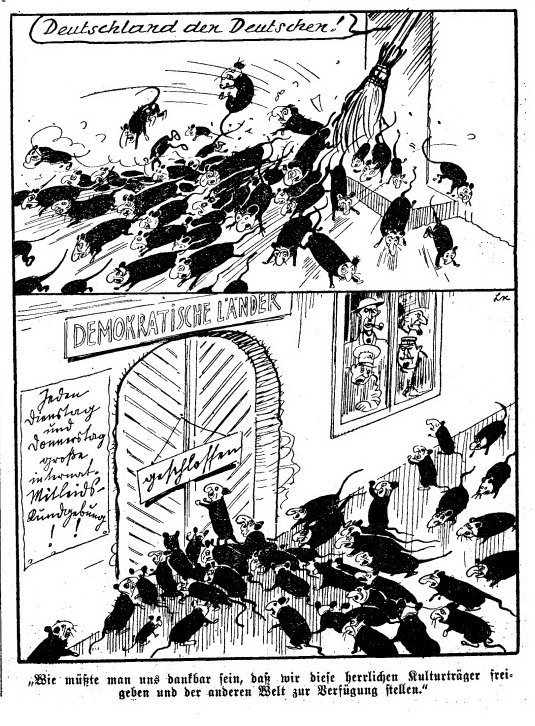 The New York Times pointed to musician Pete Fraser’s tweet comparing the Daily Mail cartoon to an incendiary cartoon from 1936. That cartoon was published in an “anti-Semitic children’s book” titled “Trust No Fox in the Green Meadow and No Jew on his Oath.”

One of these was in today's Daily Mail and one is nazi propaganda. Take your time. pic.twitter.com/VjPYrwYKvS

iMediaEthics has written to the Daily Mail to ask for comment. We haven’t heard back, but The Independent got a comment from a Daily Mail spokesperson who claimed the newspaper didn’t get any complaints over the cartoon.

“We are not going to dignify these absurd comments which wilfully misrepresent this cartoon apart from to say that we have not received a single complaint from any reader,” the spokesperson told The Independent.

And yet Tell MAMA UK, an English NGO covering anti-Muslim attacks, complained to the Daily Mail in an open letter about the cartoon. “The cartoon was a depressing attempt to couch stereotypes in the guise of artistic freedom for a national newspaper,” the group wrote. “The suggestion given was that Muslims are symbolic of men with beards and with their wives walking behind them and where refugees cannot be fully trusted since their migration is allowing in terrorists – note the man with the weapon.”

In addition, Tell MAMA UK asked why rats were used in the cartoon.

“We are very concerned that the cartoon places fleeing rats with the individuals in the cartoon. Is the Mail suggesting that the refugees or Muslims are rats? Why was other wildlife not used and why rats? Such imagery should never be repeated again. In 2015, the production of such imagery is simply an insult to us all.”

Read tweets about the cartoon below.

Corrected name of cartoonist. Mac’s real name is Stanley McMurtry not McCarty. We regret the error.