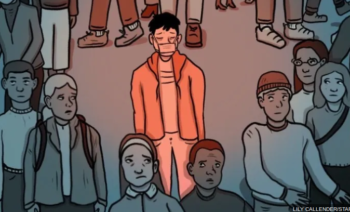 The Daily Californian published a coronavirus cartoon with a “harmful stereotype of the Asian ethnic group,” the paper admitted in a March 8 editor’s note and apology.

The March 6 cartoon “should not have been published,” the paper’s editor-in-chief Josh Yuen wrote. The Daily Cal is the student newspaper for the University of California-Berkeley.

It showed someone “of Asian descent, wearing a mask, isolated in a crowd while several bystanders pass by with visible concern,” the paper said.

“While it was never the illustrator’s intent to discriminate against people of Asian descent, we as a news organization recognize the gravity of perpetuating negative stereotypes, especially in the context of COVID-19’s impact on communities all over the world,” Yuen wrote. “We condemn both physical and verbal attacks on people of Asian descent due to racist assumptions about the coronavirus.”

Yuen told iMediaEthics by e-mail, “In short, multiple people reached out via social media condemning the illustration, and we also received a couple of emails about it.”

He continued, “After consulting with our upper management and senior editorial board, we reacted swiftly to firmly remove the illustration and publish the apology. The illustration was originally attached with an editorial condemning xenophobia in light of COVID-19, which is why it is depicted as such, but the file was re-used for the op-ed in question when it should not have. Our creative director is working to streamline this process so that we are more vigilant with stories on this front.”