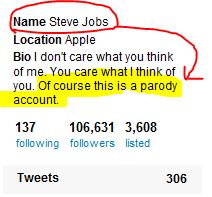 The bio section of the Twitter account for "CEOSteveJobs" clearly identifies itself as a parody account, but the Daily Mail still wrote a story about its tweet June 27.(Credit: Detail from Twitter screen shot. Note: Red arrow and yellow highlight not in original).

The Guardian wrote June 28 that its competitor the Daily Mail published a story based on a tweet from a parody Twitter account for Apple CEO Steve Jobs.

The account, “ceoSteveJobs,” identifies itself in the bio section as ” I don’t care what you think of me. You care what I think of you. Of course this is a parody account.”

But, that didn’t alert The Daily Mail that the account was fake.  The story leads with a quote from the fake Jobs’ tweet.

The Guardian noted that the story was removed later that day.

The link for the Daily Mail story directs to an error page. A Google search of the story didn’t turn up any link June 29.

Media Blog posted June 27 a screenshot of the Daily Mail story before it was removed from the site.

But the story wasn’t removed before readers noticed the newspaper’s error.  The Next Web posted a screenshot of tweets about the Daily Mail story.

The Guardian noted that “as far as anyone knows” Steve Jobs doesn’t use social networks. MediaMemo blogged June 28 that Jobs doesn’t blog either.

StinkyJournalism wrote May 7 about the time when the Huffington Post pulled a Facebook picture to accompany stories on Faisal Shahzad, the then suspect in the failed Times Square bombing.  It turned out that Huffington Post did use a Facebook photo of a Faisal Shahzad, but he was wrong one.  The real bomber, Shahzad (not the one whose photo was published in HuffPost), pleaded guilty June 21 to the 10 charges against him in relation to the attempted bomb plot, The New York Times reported.