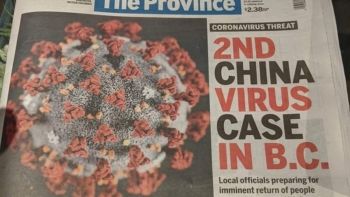 It was OK for the Vancouver Province newspaper to refer to coronavirus as “China virus.”

The headline, “Coronavirus threat – 2nd China Virus case in B.C. – local officials preparing for imminent return of people stranded in city of Wuhan, epicenter of global crisis” (referring to British Columbia), was published Feb. 2020 and prompted 13 complaints about discrimination and inaccuracy to the National News Media Council. The council noted there was a Change.org petition critical of the headline, but noted the council reviewed despite the “campaign.” The council dismissed the 13 complaints against the daily newspaper.

The Change.org petition had more than 15,000 supporters.

The council singled out one of the 13 complaints as a representative to evaluate. That complaint noted that other viruses “were not interchangeably used or strictly referred to by their place of origin,” and was concerned about potential stigmatization.

In its defense the Vancouver Province explained it used the phrase to “geolocate” where the virus started and noted its editor went on the CBC radio station to respond to criticism.

The paper’s editor, Harold Munro, told CBC, “I have certainly spoken with and heard from many people who felt the words ‘China virus’ in a headline could encourage racism against the community, and so for that, I do apologize. It was certainly not our intention to do that or to give the virus a new name.” iMediaEthics has written to Munro.

“The NNC accepts the news organization’s position that it did not use the term to replace the proper name of the virus in this instance and that it does not intend to in any future headlines,” the council wrote, adding that the Vancouver Province used coronavirus and Wuhan in the headline and story.

The council found that the Vancouver Province‘s story didn’t appear to discriminate against China or Chinese people but provided a local angle on an international story that was “worthy of front-page placement.”

“In this case, the NNC found that the headline provided information about a concerning topic that is of both global and local interest. No evidence of inaccuracy or pejorative comment was identified in the headline or reporting in question. For these reasons, the NNC found no breach of journalistic standards and dismissed the complaint.”