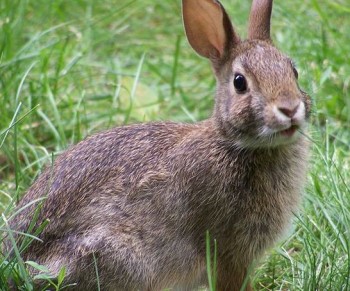 A Radio24syv host killed a rabbit on air (not this rabbit). (Credit: Wikipedia)

A personality on the Danish radio station  Radio24syv beat a rabbit to death with a bicycle pump on the air May 25 and then ate it, the Huffington Post reported.

The host of the show, Asger Juhl, “said he wanted to see whether he had become so attached to the rabbit by the end of the debate that he wouldn’t be able to kill him,” the BBC reported. Juhl did end up hitting the bunny three times, killing it.

“We didn’t do it for the sake of entertainment,” the station tweeted, according to the AFP.

More than 20,000 people signed an online petition calling for the firing of the host and the station’s managing director.

The station argued that the killing of the rabbit was intended to raise awareness on animal welfare. But in the face of much criticism and controversy, the station is standing by its decision and action.

In a statement on Facebook, Radio24syv said in part:

“We anticipated strong reactions. To take the life of an animal brings about strong emotional response in vast segments of the public. It was important to us that the rabbit would not suffer unnecessarily, and was put down accordingly to careful instructions by a professional animal caretaker from a Danish Zoo.

“We knew that we would be accused of provocation. And yes, we indeed wanted to provoke the public and to stir a debate about the hypocrisy when it comes to perceptions of cruelty towards animals.

“But it is not an empty provocation; the presenters of the program ate the animal after killing it.”

The station argued the stunt was meant “to expose the vast hypocrisy surrounding our relationship with animals” and commented that Denmark consumers don’t ask “questions about the life or the death of the animal” that is bought in store for eating.

Further, host Juhl said that he got tips on how to kill the rabbit from a zookeeper.