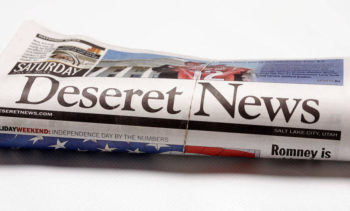 The Deseret News explained why it decide to name a 16-year-old boy who was shot in a school shooting last month.

The Deseret News’s managing editor Doug Wilks wrote Oct. 28 that at first, the Salt Lake City newspaper didn’t name either the victim or the 14-year-old student who is accused of killing the 16-year-old.

“Many factors come into play for journalists in reporting shootings at schools, particularly when minors are involved,” Wilks wrote. “And among the most vexing is if and when to report the names of the juveniles.”

The paper’s initial reports focused on what happened, and not to whom and by whom, Wilks explained. Wilks wrote:

“During the first day publication of the story, neither the name of the suspected shooter nor the victim were used. We sought information on the circumstances, background and risks to individuals, and we moved cautiously (and accurately) in our approach to the story.”

Then, after the first day, the News looked into other issues like how families, school officials and the community were reacting. In addition, after seeing false claims on social media about the shooting, the paper decide to name the victim. The Deseret News did not name the 14-year-old accused of shooting the 16-year-old though, given the changing circumstances.

“Eliminating confusion and rumor was among the strongest reasons we decided to report the name of the victim, which was widely known in the greater school community,” Wilks wrote. “Using names also allows others to come forward with helpful information to law enforcement, school officials and even the families of those involved.”