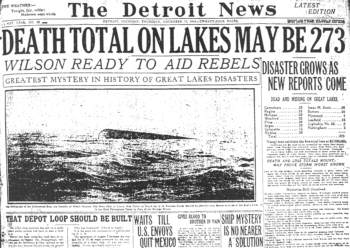 A 1913 front page from the Detroit News

It was not libelous for the Detroit News to call Memphis radio host James Edwards a “leader” in the Ku Klux Klan, the Michigan Court of Appeals ruled, according to Courthouse News. In an e-mail to iMediaEthics, Edwards called the ruling a “miscarriage of justice.”

“Of particular note to some in the Jewish community is the unprecedented support the Trump campaign has received among white supremacist groups like the Ku Klux Klan and leaders like James Edwards, David Duke and Thomas Robb, the national director of the Knights of the Ku Klux Klan in Arkansas. All of these leaders — avowed racists and Holocaust deniers — have publicly expressed strong support for Trump and hailing him as the best candidate to lead the country with his slogan ‘make America great again.'”

After Edwards complained and called for a retraction, the Detroit News added a clarification to explain Edwards isn’t a “formal” Ku Klux Klan leader. According to the appeals court ruling, the clarification was added on April 12, 2016, in print and online. That clarification reads:

“Clarification: James Edwards, the Memphis-area host of the radio show ‘The Political Cesspool’ has no formal position with the Ku Klux Klan. He has informed The Detroit News that he believes a March 17 opinion column about his support of the presidential campaign of Donald Trump left the impression that Edwards served in an official capacity with the Ku Klux Klan.””

Despite the clarification, Edwards sued for defamation and invasion of privacy, Courthouse News reported. However, both the original trial court and appeals court ruled against his claim. “Considering the multiple meanings that ‘leader’ can have, we do not read the sentence to imply necessarily that Edwards must have held some official, designated leadership role in the Ku Klux Klan,” appeals court judge Brock Swartzle ruled. Swartzle noted that Thompson’s comments are “protected opinion speech.”

Further, Swartzle noted in his ruling that even though “there is no record evidence” to show Edwards is a member or leader in the KKK, because “Edwards has espoused views consistent with those associated with the Klan and, equally as important, he has repeatedly and publicly embraced several individuals who are strongly associated with the Klan,” it wouldn’t be defamation to link him to the KKK.

“In my opinion it is a miscarriage of justice when a media outlet is allowed to libel a conservative activist by blatantly violating the legal definition of what constitutes defamation according to the Restatement of Torts.

“It’s amazing that someone who is not a member of a terrorist organization can be alleged to be its leader. This goes above and beyond the free speech protections sanctioning rhetorical hyperbole.

“Donald Trump spoke on the campaign trail about loosening the libel laws that shield renegade news agencies so that victims can seek recourse in the courts. I now call on the president to deliver on that promise.”

In a statement on his website, Edwards responded to the ruling writing that he sued “solely because I found the allegations to be both defamatory and damaging.”

The Detroit News pointed iMediaEthics to its news article on the ruling, which quoted the paper’s attorney, Len Niehoff, as saying, “This case was an attempt by someone with white supremacist views to silence … courageous people like Bankole Thompson who’ll criticize them for those views.” Further, Niehoff said the paper is “very gratified” with the ruling.