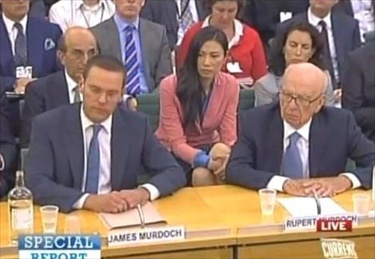 Myler, a former editor, and Crone, a former legal manager, claim they “did inform” Murdoch “of the ‘for Neville’ email” from Gordon Taylor’s attorneys.  Gordon Taylor, who runs the Professional Footballers Association, was paid about $1.1 million by News International in 2009 after Taylor’s attorneys reportedly found evidence of phone hacking. The payout, OK’ed by James Murdoch, has been called part of a cover-up.

But, Murdoch told Parliament that when he paid Gordon Taylor “a confidential six-figure sum in 2008” he didn’t know “about a piece of evidence known as the ‘for Neville’ e-mail” which had “transcripts of 35 hacked phone messages from Taylor’s phone, Talking Points Memo reported.

According to Talking Points Memo, News Corp. has stated that Murdoch “stands by his testimony.”

The New York Times noted that Financial Times’ general counsel Tim Bratton noted that Crone is a “libel expert,” so his claims are “significant.”

Les Hinton resigned in mid-July from his post as Dow Jones CEO. Hinton, a former News International CEO, may be investigated in the U.S., the Guardian reported.

U.S. Senators Barbara Boxer and John Rockefeller are calling for an “inquiry into whether senior Dow Jones executives, Hinton especially, had any knowledge or role of alleged criminal activity at News Corporation.”

Meanwhile, News Corp-owned the Wall Street Journal reported that “the U.S. Justice Department is preparing subpoenas as part of preliminary investigations into News Corp. relating to alleged foreign bribery” and the accusations that News Corp.-entities may have hacked 9/11 victims’ phones.

The announcement was made on Twitter, according to the Guardian and the e-mails reportedly came from News International newspaper the Sun.

Also during that hack, LulzSec re-routed Sun readers to a hoax story reporting that Rupert Murdoch was dead.  See iMediaEthics’ story on that hack here.

According to the Guardian,  “Some accounts belonging to Anonymous also began tweeting email addresses and passwords for staff at News International, including what seemed to be an email account and password for Rebekah Brooks under her previous married name of Wade while at the Sun.”

Former News of the World “news editor” Matt Nixson was fired from fellow News International-owned newspaper the Sun, according to the Guardian.

He was the features editor for the Sun.  While “News International sources stressed this was standard procedure and did not indicate any wrongdoing during Nixson’s time at the Sun,”  his firing is a “result of News International’s internal investigation following allegations of phone hacking.”

According to the Guardian, “his computer was seized.”

The Telegraph noted that Nixson was a News of the World editor “in 2006 when Andy Coulson was editor of the paper.”