Do Robot Journalists Need Bylines? And Other Ethics Advice? - iMediaEthics

Do Robot Journalists Need Bylines? And Other Ethics Advice? 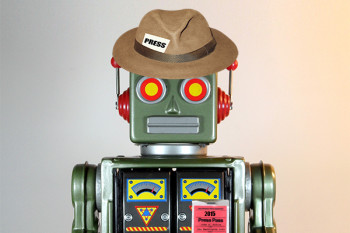 Kent, in a post on Medium, suggested an “ethical checklist for robot journalism,” when computers turn data into news stories. The AP and Los Angeles Times are both currently publishing robots-written stories, the Huffington Post reported.

While ethics hasn’t really come into play for robot stories given how “formulaic” they are, Kent pointed out that “inevitably, news companies will be testing automatic newswriting on more challenging subjects.”

Kent noted that the AP “transmits” some robot-written stories. The AP has used robot-written stories since last summer and “generated 3,000 stories per quarter, ten times its previous output,” Poynter reported in January. The stories disclose that they were “generated automatically by” the company Automated Insights, according to Poynter.

“My article is based on conversations at AP and also with others involved in automated journalism,” Kent told iMediaEthics by e-mail.

Kent listed numerous questions for accuracy and ethics in articles by computers, which include:

In addition, “Try to consider all the what-ifs in advance,” like why certain information may get first billing in stories.

Do Robot Journalists Need Bylines? And Other Ethics Advice?