It would seem to be the blockbuster business story of the millennium. That is, two of the biggest companies and best-known brands, Google and Apple, were merging as one, with Google buying Apple. Well, Dow Jones briefly published just such a story after a technical test apparently prompted a dummy article to go live.

It was, of course, fake news. Dow Jones pointed iMediaEthics to its press statement that said “The items, which were never intended for publication, were accidentally published as part of a technology test.”

The statement explains the “erroneous headlines” were published between 9:34 and 9:36 A.M. on Oct. 10 and further quotes Dow Jones CEO William Lewis as saying:

“I take today’s inadvertent and erroneous publication of testing materials extremely seriously. While immediate corrective action has been taken, I have also ordered a review of news and technology processes in this area.”

iMediaEthics notes that publishers typically use dummy text like Lorem Ipsum, nonsense words or just the word test to signal test material. In 2011, the Washington Post published an article about Christopher Hitchens’ death with dummy text still in it; in that case, placeholder text like “cause of death” was left in to signal where editors were to insert the real information. iMediaEthics has written to Dow Jones to ask why it didn’t use placeholder text or Lorem Ipsum in the article if it was just a test article.

The fake story and headline alerts claimed Google would shell out $9 billion for Apple and that Apple’s Steve Jobs “suggested” Google buy Apple in his will. CNBC noted that Apple’s market value is actually “greater than $800 billion,” so the claims were “obviously incorrect.” The fake news story also claimed “the deal was announced when Jobs’s will was read in Cupertino, Calif.” and that “obviously Google will move into Apple’s fancy headquarters.”

Further, the bogus story alleged, “Google employees said, ‘Yay'” and that Google CEO Larry Page was involved in the deal. But, as tech site Ars Technica flagged, Page hasn’t been had the title of Google CEO since 2015; he is now the CEO of Alphabet, the parent company for Google that Page announced in 2015.

See the fake news story below, via the New York Times. 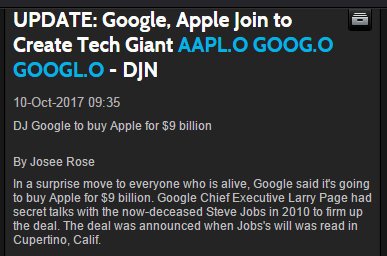 Fake Dow Jones headlines that were published on Dow Jones’ newswire, according to CNBC, included: