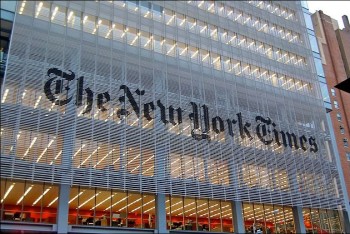 Last month, the New York Times‘ edits to a March 19 article about Facebook’s chief security officer Alex Stamos leaving the company garnered considerable attention. The short version: The Times published an initial, brief article, then later updated its article adding hundreds more words, but notably removing this specific sentence: “Stamos had been a strong advocate inside the company for investigating and disclosing Russian activity on Facebook, often to the consternation of other top executives, including Sheryl Sandberg, the social network’s chief operating officer.”

The deletion of that one sentence, in spite of the addition of other paragraphs and information that the Times argued incorporated that issue, triggered another story. The site Law & Crime, which is a sister site to Mediaite, published a story suggesting the Times removed the line because of pressure from Facebook. (Law & Crime’s story alleged, “The New York Times apparently offers powerful third parties the ability to edit away–that is, to delete from the internet–unfavorable coverage appearing in the paper of record’s online edition. One such entity seemingly afforded the privilege is Facebook. And this has legal experts raising potential antitrust concerns.”)

Quickly, the Times and its reporters on the story pushed back, pointing to the extensive additions to the article and calling the Law & Crime story inaccurate. The final online version of the Times article reported that Stamos “and other Facebook executives, such as Ms. Sandberg disagreed early on over how proactive the social network should be in policing its own platform.”

In response to the article, which itself was updated after publication to note the Times‘ complaints about “the premise of the piece” and to include an editor’s note acknowledging it was edited after publication, The Times‘ PR department tweeted, “We regularly edit web stories to refine, add new info, context or analysis. We only make note of changes if they involve an error. This story grew and evolved with more detail over the day and those points were moved elsewhere (bolding ours): https://www.nytimes.com/2018/03/19/technology/facebook-alex-stamos.html ”

The Times declined to comment to iMediaEthics further on that instance.

The minor media spat brought up a bigger issue, however, one that iMediaEthics and others have covered before. It confuses readers who read the article, and may go back later to find an altogether different article: articles that significantly change, without transparent disclosure the article has been significantly updated to readers, throughout the course of a day or longer. More than 5 years ago, the site News Diffs started tracking changes to some articles on websites, including the Times and CNN, and some readers go to NewsDiffs to see the changes to articles.

The problem at the Times has been brought up for years, with then-public editor Arthur Brisbane writing in 2011 about articles significantly changing online and confusing readers. “Versions evolve and sometimes morph into something quite different,” he wrote. “Mistakes happen and are fixed. How The Times tracks and manages this can be very confusing.”

“It’s problematic when content just disappears,” Brisbane wrote, calling for the Times to “do more to document and retain significant changes and corrections.” By doing so, the Times can help provide transparency and accuracy for readers and staff, he wrote.

iMediaEthics wrote to the Times to ask if, in light of the Facebook article and the previous public editor columns, the newspaper was considering or looking at ways to more transparently note significant changes to articles. The Times‘ spokesperson Danielle Rhoades-Ha simply responded, “No.”

In addition to the Facebook case, iMediaEthics has collected eight other examples flagged by previous public editors, iMediaEthics stories and a recent case from a reader.

In that Yale rape trial article, according to NewsDiffs, a version saved at 4:38 PM deleted several sentences and phrases and added about 600 words. Deletions made at that time included the removal of the descriptor “often tearful” about the trial, a deleted quote from the defense lawyer and the addition of the name and identification of an attorney and comments from National Sexual Violence Resource Center critical of the defense and from a juror.

A version posted an hour later added quotes from the defense lawyer after the verdict. Then, at 6:43 PM. the Times tweaked its headline, changed the word “victim” to “complainant”, and changed the spelling of a juror’s last name.

Reader Aaron Nash brought the story and its changes to iMediaEthics’ attention, e-mailing us to complain about the story and note that he e-mailed the Times numerous times about the article and then its lack of disclosure about changes.

Nash, who grew up in Connecticut but said he doesn’t know any of the people involved in the story, argued the initial version of the article had an “obvious ideological slant” in favor of the accuser, and called out the Times’s reporting that the prosecution “represented the victim,” when Nash noted the prosecution represents the state. The State of Connecticut Division of Criminal Justice told iMediaEthics, “The State’s Attorney’s office represents the state.”

He also said the Times never published his comments on the article or responded to his e-mails.  “You have already made several corrections in both content and style to an article that still has factual errors, without noting or acknowledging ANY OF THEM,” he wrote to the Times in an e-mail provided to iMediaEthics. “I put it to you that you ought to publish an editor’s note, and provide the courtesy of a reply to me,”

Nash told iMediaEthics he felt the Times “demonstrated a basic failure of due diligence,” and called out the lack of transparency in noting changes. “Stealth edits to an already published piece are unscrupulous,” he wrote iMediaEthics. “It is not what I would expect of a paper of the caliber of the New York Times.”

He compared his experience engaging with NPR over his concerns over an article by the network last summer. “When I contacted NPR about their journalistic practices, I received a response from Elizabeth Jensen, the ombudsman,” he explained. “I felt Ms. Jensen made a good faith effort to address my concerns. In contrast, I received no such reply from the New York Times. I believe it is telling that the Times eliminated the position of Public Editor.”

iMediaEthics wrote to the Times to ask why the newspaper changed the word “victim” to “complainant”, if the Times would correct the description of the state’s attorney office representing the victim, and about the Times not responding to Nash’s e-mails or posting his comments.

Times spokesperson Danielle Rhoades-Ha told iMediaEthics, “Editors reviewed the reader’s notes but he did not raise anything that the editors thought was correctable.”

We also asked why the Times didn’t note with a correction that it changed the spelling of a juror’s name, given that the Times typically posts corrections for misspelled names. The Times said, “The name change was not something the reader raised but was an oversight.”