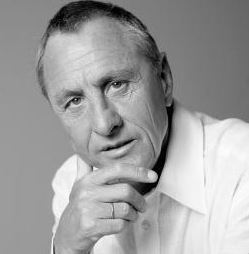 Cruyff is “Holland’s most famous (and best) football player of all time,” according to Dutch news site Welingelichte Kringen.

The newspaper Volkskrant had written the fake death story as “part of an internal software test,” the Guardian reported but the paper said it accidentally published it.

The newspaper has published an apology on its website. The Aug. 19 statement reads, according to a Google Translate:

“Due to an error in the test system for the new website is a test message with the heading “Johan Cruijff deceased ‘morning erroneously appeared in the mobile app from the Volkskrant.”

He said that the app and new website were being tested “with fictional messages,” including the fabricated “breaking news” story about Crujiff. The false story was published for about 30 minutes, according to Welingelichte Kringen.

iMediaEthics has written to Volkskrant and representatives of Cruyff for comment.

Below, see tweets about the false report.

UPDATE: 8/20/2014 10:06 AM EST Philippe Remarque, the editor for the newspaper, told iMediaEthics more about the incident by e-mail.

“We’re testing a new website and app, and a tester wanted to show to someone else what a ‘breaking news’ headline will look like,” Remarque wrote by e-mail. “Ignoring our own test protocol (never use fake news) they invented as potential case the death of our football legend Cruijff.”

He noted that the testers didn’t write a fake news story but simply put “the headline ‘Johan Cruijff deceased’ over an empty story box.”

Because of a “bug in our programming,” the fake headline was posted on the app, but it wasn’t published on the news site.

“We discovered this after half an hour and removed the headline (which cost the technicians about twenty minutes),” he wrote. “Meanwhile, the mistake became a popular topic on social media and news websites.”

Remarque said he “apologised to Johan Cruijff in media statements and personally.”

“I approached him by mail, on the advise of his manager, to whom I talked (there is no direct access to Cruijff). We assured him that de Volkskrant wishes him a splendid health and a long life. So far I didn’t receive a reaction.”

Remarque apologized again for the “breach of protocol” by the app’s tester and its “painful result.”