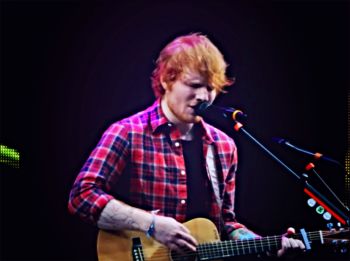 Whoa! Fans have to pay up to $4,000 to shake hands with pop star Ed Sheeran?! Outrageous!

Alas, the UK Daily Star has egg on its collective face after claiming Ed Sheeran was charging his fans the equivalent of $4,000 to shake his hand and take a selfie. But, Sheeran isn’t, the Star‘s story was wrong and now the newspaper is apologizing to the musician.

In an Oct. 15 apology, the Star admitted its article was inaccurate, but didn’t say what went wrong and did not name the source for the false story. Instead, the apology states:

“IN our article “£3.4k to Meet Ed – Star’s “greet” deals twice as expensive as Britney’s” we claimed that fans were being charged to meet Ed Sheeran, shake his hand and grab a selfie with him on his world tour.

“We wish to point out that Ed Sheeran does not participate in paid-for meet and greet opportunities (except for rare exceptions where a charity auction has taken place) and that any company who is offering such a package is doing so without his consent or authority. Mr Sheeran is hugely grateful for his fan support and to suggest that he would charge for such an opportunity is incorrect and misleading. We apologise to Mr Sheeran for our error.”

The Star‘s original story now goes to an error page. However, a Google cache shows that the tabloid billed the Oct. 8, 2017 story by Mike Parker as “an exclusive.” The story didn’t say what the source was for its claim of a meet-and-greet in exchange for several thousand dollars. It quoted from an online commenter, “Jessica A,” saying she wasn’t happy with her VIP package in Los Angeles and an unnamed person stated similarly about his “expensive add-ons” in Washington, D.C.  The article cited an unnamed U.S. spokesperson for Sheeran saying that “local promoters” are in charge of local “paid-for guest packages.” 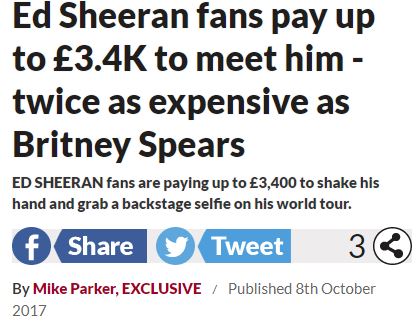 A screenshot of the Daily Star article

iMediaEthics has written to Sheeran’s representatives to ask if he is satisfied with the apology. We’ve also asked the Star what went wrong and what the source for its inaccurate figure was.