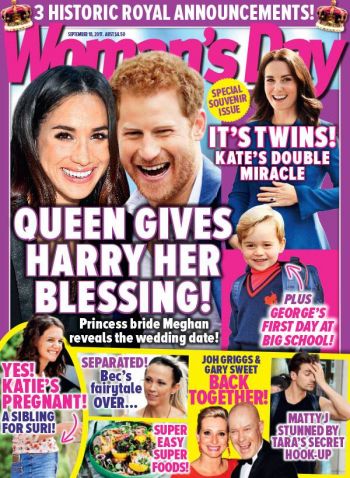 The celebrity, Australian morning host Chrissie Swan, and her children were pictured and named in Woman’s Day‘s March 27, 2017 print edition. The photos showed Swan and her children in the car at a McDonald’s fast food restaurant and walking on the street.

Swan complained about the photos of her children being published showing them with pacifiers and a security blanket. She told the press council she didn’t know the photos were being taken and that they upset her children.

Photos of Swan and her children five years ago led to “significant and painful criticism,” the press council said that Swan claimed, so she now tries to make sure her children aren’t photographed. She noted she will do publicity for her work but doesn’t post pictures of her children’s faces on social media and tries to avoid them being photographed.

Woman’s Day responded claiming that it was a positive article and claimed Swan’s children were fair game since she had previously talked about her children in her memoir and interviews. Woman’s Day also claimed it thought Swan wanted to publicize her children because of social media posts and other online photos of her children.

The press council rejected that argument saying that just because Swan had mentioned her children, since she had tried to keep their photos out of media, they aren’t fair game. In addition, the press council noted the photos were about Swan’s private life. As such the photos were an invasion of privacy and potentially upsetting without any public interest.

iMediaEthics has tweeted Swan and written to Woman’s Day publisher Bauer Media for responses to the ruling.