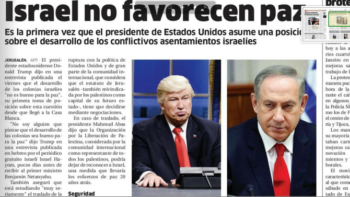 Alec Baldwin’s impersonation of Donald Trump on Saturday Night Live is apparently so uncanny that some people can’t tell the difference. It allegedly fooled the editors of El Nacional, a  newspaper in the Dominican Republic, which ran Baldwin’s photograph instead of Trump’s in a news story in its Feb. 10 edition.

According to NBC News, the incorrect photo was used with a story on U.S.-Israeli relations. “Baldwin’s picture appeared next to one of Israeli Prime Minister Benjamin Netanyahu in a story about Israel allowing more settlers into lands disputed by Palestine,” NBC News reported.

In a correction on its website, the newspaper said (according to a Google Translate):

“El Nacional published on Friday as Donald Trump a picture of actor Alec Baldwin, who imitates on a television program the president of the United States.

“The picture was sent that day by Associated Press (AP) with the name of the actor and reported on the program, but was placed as if it were Trump’s, a situation that went unnoticed for all who reviewed page 19.

“El Nacional apologizes to the readers and all those who felt affected by the publication.”