Enigmatic Startup Company, "Plato's Forms" : Aims to Improve Quality Information in Online Media... Or Do They?

Enigmatic Startup Company “Plato’s Forms” Aims to Improve Quality Information in Online Media… Or Do They? 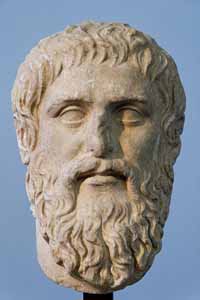 Plato (pictured in this sculpture) lends his name to a new venture--Plato's Forms--aiming to improve the conduit between online media and their sources. (Credit: Marie-Lan Nguyen/ Wikimedia Commons)

Think that online media and “the low transaction costs to publishing [have] created a flood of low quality information”? You might be happy to know, then, that Plato’s Forms, a somewhat cryptic startup, is one step closer to launching its product–a “professional messaging platform focused on solving the problem of rapid proliferation of misinformation in online media.”  But what that product will actually mean in the flesh, and whether that flesh will create better and more ethical journalism, is rather opaque at the moment.

The site, which so far has no demo and little explanation of what it will actually do, closed a $545,000 round of funding this November, according to a November 23 press release. This funding announcement (repeated on a few blogs like Tech Crunch and VentureBeat) was the first iMediaEthics had heard about the company.

But because of the goals the group purports to want to reach, it looked like something worth a closer ethical look.

According to its self-description, Plato’s Forms presents itself as a tool to create better more accurate journalism. It purports to do that by helping online journalists have better, easier access to information. But what kind of information exactly does Plato’s Forms aim to make more accessible?

“Our generation has hailed the democratization of information, but has paid the price with information overload and distrust of sources,” the company writes on their website.

“It is in this environment that companies seek to convey their messages clearly and according to their interests – to shape the public dialogue in ways that support their business goals. Skeptics might call this “spin” but it serves a very important purpose,” they continue.

This raises the question, what is the “very important purpose” that spin provides? It also makes it seem like the service provided by Plato’s Forms is going to be one that increases journalist’s access not to information in general but specifically to “spin.”

While it may be true that lack of information creates a lot of bad journalism on the Web, it doesn’t hold that the information lacking in these bad stories is necessarily the stuff provided by companies with a vested interest or by their PR firms. In fact, it often seems that bad Web journalism has too much of that kind of information already…

At the same time, It’s not a guarantee that more access to companies’ spin will produce worse journalism. Tech Crunch blogger MG Siegler writes that it might be helpful to him. “As a blogger, sometimes the most difficult part of writing a post is contacting the company it is about. First, you either have to search your contact list, or the web, to figure out who to reach out to. And then you might not get a response right away. And finally, if you do get a response, it may include misdirection or less information than you’d like.”

Nor is that access guaranteed to produce good journalism. Siegler continues, “The idea is to make it easier for the two sides to communicate on any given story, so the correct information is shared with the readers.” But, again, this makes the assumption that what companies have to offer journalists is “correct information” and that this information or “spin” is the principle element of accuracy online journalism lacks. This is just not the case. In many instances that StinkyJournalism has recorded, what online journalism (and all journalism) suffers from is a failure to vet spin messages and the raw information coming out of companies or other sources. Plato’s Forms doesn’t propose–at least in the info they’ve published so far–to help with that problem.

With no demo of their actual product, there’s no way to know now whether these issues will be manifest in the tool Plato’s Forms is creating.  On their jobs page, they write “we can’t show you what it is right now, cos it’s sekrit [sic]- but OMG it’s pretty wicked.” According to the press release “The company plans to develop and launch its first product for journalists and corporate communications professionals in the Spring of 2010.” So we’ll keep a critical eye out for what eventually emerges from the black box pitch for Plato’s cave.

Enigmatic Startup Company “Plato’s Forms” Aims to Improve Quality Information in Online Media… Or Do They?