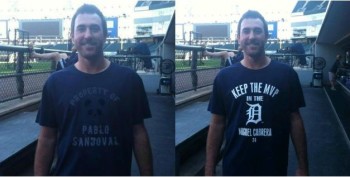 See above a side-by-side comparison of the fake photo (left) and the original Sept. photo (right).(Credit: CBS News, screenshot)

The photo shows Verlander posing in a stadium and was doctored by changing the wording of his T-shirt, which originally read “Keep the MVP in the D Miguel Cabrera 24.”  The fake photo shows his T-shirt reading “Property of Pablo Sandoval” and was in light of Verlander having “allowed two home runs to San Francisco Giants third baseman Pablo Sandoval in Game 1 of the World Series” this past week, MLive noted.

“The actual t-shirt says keep the MVP in the D,” Britten confirmed.  Other evidence the photo wasn’t a new picture:  CBS Sports reported that:

“If anyone looked more closely, they’d notice the picture wasn’t taken at either AT&T Park or Comerica Park (it’s actually U.S. Cellular Field in Chicago). And there’s someone in shorts behind him — and it hasn’t exactly been shorts weather in San Francisco or Detroit this week.”

As of Oct. 28 at 11:30 AM EST, neither King, who identifies himself as “Sports Illustrated‘s senior NFL writer,” nor Feinsand, New York Daily News’ “Yankees beat writer,” have apparently tweeted that the photo was a phony.

Feinsand told iMediaEthics by email that he “did not know it was a fake when I re-tweeted it.”

“I saw it on my iPhone while sitting on a plane before takeoff and found it quite humorous,” he wrote. “Because of the size of the screen, I didn’t pick up on the fact that the photo had been taken in Chicago. Had I known, I probably still would have re-tweeted it, though with a mention of it being fake.”

Feinsand added that after he tweeted the photo, “Some followers tweeted to me during my flight that it was fake, but I didn’t see those until the next day. I actually tweeted out a mention earlier today that it was a fake, but that I found it funny nonetheless.”

iMediaEthics has written to King asking if he knew the photo was a fake and if he will let his Twitter followers know that the photo isn’t real. We will update with any response.

Fox Sports’ Erin Andrews, who re-tweeted the photo from a different tweeter, @EricLyonsODLA, questioned if the photo was legit.

iMediaEthics wrote in 2010 when Outside magazine ran a doctored photo of Lance Armstrong.  That photo also faked by  changing the wording of his T-shirt.