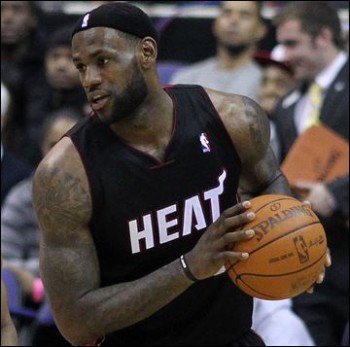 ESPN TV and radio host Dan LeBatard was suspended for two days after he rented a billboard and tried to buy a newspaper ad to criticize NBA player LeBron James.

“Dan LeBatard will be off the air for two days, returning Monday.  His recent stunt does not reflect ESPN’s standards and brand.  Additionally, we were not made aware of his plans in advance.”

LeBatard responded to the suspension in a text to the Miami Herald‘s Greg Cole,  “I guess ESPN didn’t find it all quite as funny as I did,”

James announced last month he was leaving the Miami Heat, the team with which he won two NBA championships, for his former team the Cleveland Cavailiers.

Heat fans had a message for LeBron in Akron. Notice the font choice. (Via @JeremyinAkron) pic.twitter.com/3rArsBnKit

According to Mediaite, LeBatard’s snub of James was in response to James snubbing Miami. “Of all the people the NBA all-star thanked in his article [for Sports Illustrated about leaving Miami], he did not include the city of Miami and its fans,” Mediaite reported.

Below see what the ad would have looked like.

According to the Plain Dealer, last month, “Representatives of The Dan LeBatard Show called the Cleveland media outlet on Tuesday to purchase a full-page advertisement in this Sunday’s edition of the newspaper, Northeast Ohio Media Group Vice President of Sales and Marketing Mike Maleski confirmed.”

However, the Plain Dealer didn’t accept the ad.  “They have declined our money,” LeBatard said on air in response to the newspaper’s decision to not run the ad. “They do not want our money. They will not allow us to put our ad in the paper.”

LeBatard said he wasn’t trying to be mean but instead “poke fun at James and Northeast Ohio residents,” the Plain Dealer reported.

“I just don’t think it was appropriate for our community. We’re proud that LeBron is back. This is his hometown, and that [ad] is not something we want to be a part of or want to take money for.”

LeBatard later said his attempted print ad buy was “a shameless attention grab masquerading as a cause.”