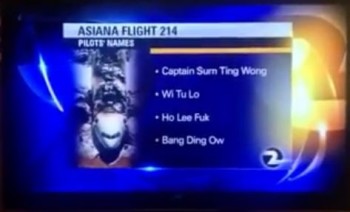 The station reported in a July 12 on-air report that the names of pilots were Captain Sum Ting Wong, Wi Tu Lo, Ho Lee Fuk, and Bang Ding Ow. The names of the pilots were read aloud and showed on air in a graphic, according to a YouTube video of the broadcast.

Said aloud, those names are offensive and racist, as KTVU has acknowledged in later statements.

KTVU has commendably issued many apologies for its reporting fail, but interestingly, in an early statement about the error, said that it had confirmed the names with the National Transportation Safety Board.  So how did the error slip through the cracks?

The NTSB issued a statement that confirmed that it had actually told KTVU that the names were correct.  Its July 12 statement apologized and explained that an intern made the mistake in confirming the “inaccurate and offensive names.”  That intern “acted outside the scope of his authority,” and the NTSB added that it doesn’t identify “crew members or people involved in transportation accidents to the media.”

Kelly Nantel from the NTSB told iMediaEthics by email that KTVU provided the names for confirmation, as opposed to the NTSB intern providing the names to the station. iMediaEthics has reached out to KTVU asking where the four names came from, and we will update with any response.

Wasim Ahmad, an assistant professor of journalism at Stony Brook University and contributor to iMediaEthics, reminded on Twitter yesterday that the error was “racism, not humor.”

TV prank isn’t “hilarious” as your tweet says @Gawker. 2 died in the plane crash & this is racism, not humor. Think before tweeting. @aaja

Below, check out a round-up of some of KTVU’s apologies for the fail.

KTVU issued that apology both in an online report, on social media and on-air.

Offering our sincerest apology after falling for a hoax on @KTVU News at noon http://t.co/TCPyauAn0f
— KTVU (@KTVU) July 12, 2013

The online story admits that “we made several mistakes” in reporting and fact-checking the four names:

“First, we never read the names out loud, phonetically sounding them out.

“Then, during our phone call to the NTSB where the person confirmed the spellings of the names, we never asked that person to give us their position with the agency.

“We heard this person verify the information without questioning who they were and then rushed the names on our noon newscast. “

Despite the NTSB admitting that it had a role in the error, KTVU said in its apology that it “accepts full responsibility for this mistake.”

MSNBC noted that KTVU’s Tori Campbell apologized shortly after the original broadcast for the error.