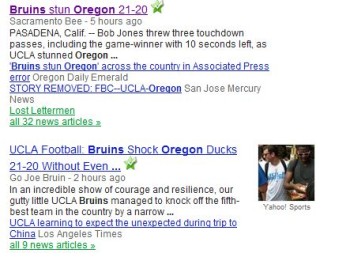 See above Google results for AP's "test" story that was "inadvertently" posted.

News outlets published a “test story” from the Associated Press by accident, and are now unpublishing the fake sports story.  Deadspin explained the story was about a football game between UCLA’s Bruins and the University of Oregon’s Ducks, and that the two teams “aren’t even scheduled to play one another this season.”  The “test story” was “published everywhere” because “most newspaper and TV stations automate the stories they get from the AP,” Deadspin wrote.

The New York Times replaced its version of the story with the following:

The New York Times replaced its story with this note. (Credit: NYTimes, screenshot)

The Huffington Post published a similar note about the AP having “withdrawn” its report.

The Sacramento Bee published a “disregard advisory” saying “the story is a test that was sent inadvertently.”

The Washington Post’s version “UCLA stuns Oregon 21-20 on late TD pass,” was still published when iMediaEthics viewed it and includes one sentence:

The Kansas City Star appears to have simply removed the story, as a Google search result shows its story, “Bruins stun Oregon 21-20” with phrases from the story, but the link goes to an error page.

Deadspin wrote that the story “has now been published everywhere” and that there are “more than 900 results” for the “AP’s headline.”  The Oregon Daily Emerald reported that there were “1,300 hits by 3:30 p.m.”

Oregon TV news KGW Channel 8 noted that “the Ducks have no scheduled game against UCLA this season” and the Oregonian added that “the only way they would meet would be in the Pac-12 Championship game.”

We’ve written to the Associated Press for more information about this and will update with any response.

We wrote earlier this year when a set of fake quotes was published on the Oregon Ducks’ website.  ESPN unpublished a blog post that included fake quotes from Oregon Ducks basketball coach Dana Altman.  The quotes were posted by hackers.