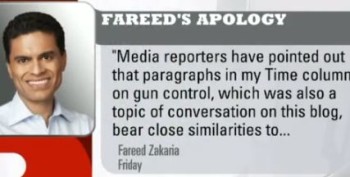 Fareed Zakaria apologized during his Aug. 26 CNN program for having “neglected to quote a New Yorker essay by Jill Lepore that I drew closely from,” according to Poynter.

According to Poynter’s transcript, he said “I was not trying to pass the work off as my own…I absolutely should have quote[d] or cited the New Yorker essay as well.
It was a mistake, but an honest one and I apologized.”

As we previously wrote, CNN and Time both briefly suspended Zakaria for what he called “close similarities” in an apology statement.

CNN issued a statement August 16 about its “rigorous” review of Zakaria’s “Sunday programs, documentaries, and CNN.com blogs” in which it said “we found nothing that merited continuing the suspension.”   CNN added:  “CNN and Zakaria will work together to strengthen further the procedures for his show and blog.”