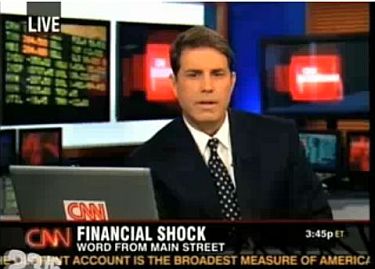 Rick Sanchez, now former CNN anchor pictured above, apologized for his comments on the "Stand Up!" radio show in a statement. (Credit: YouTube, CNN)

Rick Sanchez, the anchor recently fired from CNN for his comments in an interview, has formally apologized via a statement.

In an Oct. 1 interview on comedy radio program “Stand Up! With Pete Dominick,” Sanchez called Comedy Central’s Jon Stewart “a bigot” and said that Jewish people aren’t a minority anymore.  Sanchez also “repeatedly suggested that he had experienced subtle forms of racism in his television career,” The New York Times reported.

In his apology, Sanchez acknowledged that he spoke with Stewart Oct. 4 and that he apologized for his “inartful comments.”  He further said that “I sincerely extend this apology to anyone else whom I may have offended.” As Sanchez’s wife explained in her public Facebook post, Sanchez attributes some of his erring words to exhaustion.  Interestingly, she also used “inartful” to describe his interview misstep.  (Sanchez’s wife, Suzanne Sanchez posted on her Facebook account that her husband had apologized to Stewart and that his exhaustion from working “caused him to mangle his thought process inartfully,” The Huffington Post.)

“Despite what my tired and mangled words may have implied, they were never intended to suggest any sort of narrow-mindedness  and should never have been made,” Sanchez’s statement reads.  He confirmed that he and CNN “have decided to part ways” and spoke well of the network.

“I have nothing but the highest regard for CNN and for my six wonderful years with them,” Sanchez furthered.  “I appreciate every opportunity that they have given me, and it has been a wonderful experience working for them. I have tremendous respect for everyone there, and I know that they feel the same about me.”

Olmeda, a reporter for the Sun Sentinel and a former president of the National Association of Hispanic Journalists, called Sanchez’s firing, which happened less than 24 hours after his comments,  “an example of swift justice.”  (Olmeda was not speaking on behalf of the NAHJ.)  Later on in the program, Rosenberg identified a problem with the fast-moving news cycle.

“We in the media are amnesiacs. We don’t remember our mistakes. We’re talking about this now. We’re agreeing that it was problematic. And a week from now, something similar could happen, and we’ll make the same mistakes,” Rosenberg, a University of Southern California ethics professor and former television critic for the Los Angeles Times, explained.

Rosenberg said that he didn’t find Sanchez’s comments inflammatory because he agreed with Sanchez’s thought that Jewish people aren’t “an oppressed minority” anymore. He said the comments were possibly “mildly controversial” and “immediately blown out of proportion.”

Prince, media diversity issues writer, said that he found the media coverage of Sanchez’s interview to be hyped by the media, noting that some reports labeled Sanchez’s comments “an anti-Semitic rant” — far from what it actually was. (A Google News search of “Rick Sanchez meltdown” produces thousands of articles.  And, StinkyJournalism thinks labeling the Sanchez comments a “meltdown” is stretching it.)

However, Rosenberg added that he thinks Sanchez “should have been fired a long time ago because he’s incompetent.”

“I’ve been observing him since he was with MSNBC. He’s much more of an actor than a journalist. He’s a vamper. He showboats. He gets his facts wrong. He speaks off the top of his head, frequently incorrectly. And to me, that spells out incompetence.”

As StinkyJournalism reported earlier, Sanchez’s early October comments aren’t the first time he has erred.  He mistakenly called the Galapagos Islands Hawaii earlier in 2010, and just a few months ago labeled President Obama a “cotton-picking professor.”

Further, Rosenberg suggested that Sanchez may have kept his job after the “Stand Up!” interview had he brought in better ratings for CNN.

Olmeda said that Sanchez erred in talking about his bosses and that he “can’t defend” Sanchez’s “Stand Up!” comments.  But, he did say he was curious about journalistic standards. ” The only thing I can question is why his dismissal took less than 24 hours. And obviously, he was good enough to be on the air the day before. The day after – I really want to know what the standards are. Where’s the line drawn?”