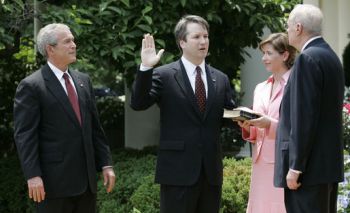 Brett Kavanaugh being sworn in to the U.S. Court of Appeals. (Credit: White House photo by Eric Draper/Wikipedia)

But, Grabien News, which identifies itself as the “consumer site” of Grabien, which hosts multimedia clips for news distribution, looked up the wrong woman.

Now, the site has retracted its story, “Something’s wrong with her’: Christine Ford’s students savage her in reviews.” Grabien has more than 60,000 Facebook followers.

The site’s founder Tom Elliott told iMediaEthics by e-mail the inaccurate article was published for three hours. “I learned of the mistake when a reporter at NBC contacted Grabien over Twitter. I immediately investigated, confirmed he was right, and retracted the post and issued an apology,” he wrote. Elliott added that “it’s embarassing, the kind of mistake everyone in publishing fears.”

Atop its story, which the site left intact but struck through, the site posted the following editor’s note:

Editor’s Note: We apologize for the error, but we’ve since learned there are two Christine Fords working in clinical psychology in California and we wrote this report about the wrong Christine Ford. We regret not going to greater lengths to ensure this was indeed the same Christine Ford. Please do not share this article with anyone (and if you have, delete it/withdraw it); we are only leaving the page up so you can see this important update.

The site’s founder Elliott tweeted that he wrote the article in question, and “as soon as the mistake was pointed out to me, I verified the article was indeed inaccurate and immediately withdrew the piece and posted an apology.”

“One of the unfortunate things about making a mistake in today’s media landscape is the difficulty undoing the damage. The piece got picked up in a variety of places and now it’s hard to rein in,” he continued. Elliott added that “this is the first time I’ve had to retract something” and that the site does “care about accuracy.”

Elliott added, ” I shouldn’t have made it in the first place. It was careless. I should have gone to greater lengths to verify the report’s accuracy before publishing.”

Drudge Report as well as Gateway Pundit shared the inaccurate story, according to progressive media watchdog Media Matters. Gateway Pundit has posted an update to its story that reads:

“UPDATE — An earlier post referenced Ford as an unpopular professor but we have since learned this was a different educator with the same name.”

Gateway Pundit previously has misidentified the driver behind the Charlottesville, Virginia attack that killed Heather Heyer, and the Las Vegas shooter.

Note to anyone who cares: Today I wrote a piece about Kavanaugh's accuser that turned out to be totally wrong (apparently there are two Calif.-based Christine Fords working in clinical psychology). 1/