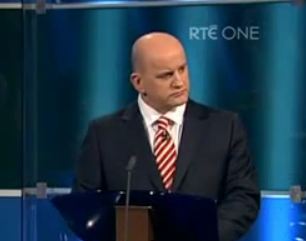 A failed candidate for Ireland’s presidency accused RTE of violating journalism standards because it aired seemingly unverified claims from a fake tweet, the Irish Independent reported.

The candidate, Sean Gallagher was “the clear frontrunner to win the presidency” when he participated in an Oct. 24  RTE debate of the presidential candidates, according to the Irish Independent. However, he lost and has since filed a complaint with Ireland’s Broadcasting Authority.

During the debate, political party Sinn Fein’s candidate, Martin McGuinness, alleged Gallagher accepted a check for €5,000.  Gallagher rejected that claim, the Irish Independent explained.  After a commercial break, RTE’s presenter Pat Kenny asked Gallagher about a tweet from Sinn Fein that claimed it would “produce the man who gave you the cheque for five grand.”  Then, Kenny asked Gallagher ” do you want to change what you said or are you still saying that it just simply didn’t happen? Are they up to dirty tricks or what?”

The tweet was fake, according to the Irish Independent, which RTE also “now accepts” as fake.   The tweet came from Twitter account “mcguinness4Pres” and read: “The man that Gallagher took the cheque from will be at a press conference tomorrow. #aras11.”  According to the Irish Independent, the tweet was proved fake within half an hour of its being published, but RTE never told viewers this during the debate.

Gallagher’s complaint to the Broadcasting Authority is that RTE misrepresented the tweet on a number of points including that the tweet came from McGuinness’ party Sinn Fein and was published by McGuinness’ campaign.  Gallagher also claims that RTE “expressly or implicitly” indicated that “Gallagher had lied to the audience, the viewers and the electorate.”

According to the Irish Independent, RTE aired the tweet’s claims ten minutes after it was posted on Twitter, so Gallagher alleges RTE didn’t “take any steps to verify the provenance of the tweet or the thrust of its contents.”

Gallagher claims RTE “applied no such norms of journalistic integrity as could reasonably have been expected” before airing it “before an estimated audience of 900,000.”   Gallagher also questioned if Kenny asked McGuinness about the tweet.

Further, the tweet is questionable because Sinn Fein announced Sept. 17 that McGuinness didn’t have an “official Twitter” account and wouldn’t until “after ratification,” the Irish Independent reported. During the debate, McGuinness’ campaign also tweeted that it hadn’t issued a comment on the issue at hand.

According to the Irish Independent, Gallagher wants a “full investigation” into how the fake tweet ended up getting aired and presented during the debate. He also wants a “formal apology” and for RTE to create a social media and Internet verification policy.

According to an Irish Central  report, Gallagher wants an “oral and/or public hearing” for his complaint.

RTE has confirmed the complaint, according to the Independent, and stated “This matter is currently the subject of a complaint to the BAI and we will be dealing with it through that process — that is the only way in which it can be dealt with at this time.”

During the past month, RTE’s standards and reports have been questioned, as we have written.  Most notably, RTE had to issue a lengthy apology – twice – and pay a substantial sum to Father Kevin Reynolds after it was found to have libeled the Catholic priest in a May 2011 program.  RTE claimed that Father Reynolds raped and impregnated a Kenyan girl.  When RTE asked him about the allegations prior to the program’s airdate, Father Reynolds denied the charges and offered to take a paternity test, which RTE didn’t take him up on.  The libelous report has sparked a few investigations into RTE’s standards.

StinkyJournalism has written to RTE and Sinn Fein for comment. We will update with any response.