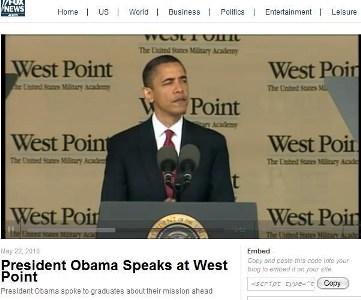 Bloggers questioned if Fox News removed 12 seconds of applause from the May 22 commencement speech Barack Obama gave at West Point.

The complete White House video shows cadets applauding Obama for 12 seconds after Obama says “we are poised to end our combat mission in Iraq this summer.”  However, in the Fox News video, after that statement, video footage shows Obama standing silently at the podium for 12 seconds.  Then, the video cuts to around the 20-minute mark of the White House video. Why?

Filmmaker Michael Moore tweeted  first about it, noting that Fox News video was different from the White House one.

Think Progress wrote May 24 that the missing applause makes it look like Obama “is bizarrely staring silently for a long period of time.”  Think Progress noted that “the audio is cut…for the 12 seconds of applause, and then skips to another part of the speech.”

Raw Story noted that in the Fox News video, “Obama appears to look around the room in silence” after saying  “We are poised to end our combat mission in Iraq this summer.”  But, in the original White House video, that sentence “is met with substantive applause.”

Media Matters wrote May 24 that a possible explanation- could be that Fox News “used a direct feed from Obama’s microphone, and it simply didn’t pick up audience noise.  But if Fox didn’t intentionally try to make Obama look silly, why did it choose a 2-minute-clip – out of a 32-minute speech – that portrayed Obama looking silently around the room, seemingly for no reason?”

Regarding the video editing, Progressive Pulse opined May 25 that “things are getting beyond ridiculous on Fox News.”

Mediaite reported May 26 that “the video editor took two clips that were meant for television individually” and put them together.  Each clip had padding on it, so when the clips were put together, there were seconds of silence.

In the past, Hannity did admit another video editing error . On Nov. 11, 2009, he said that Fox News had “screwed up” in broadcasting clips from the Sept. 12 tea party showing large crowds as if they were coverage from the November rally.

StinkyJournalism contacted two experts for their perspectives on the video editing.

Matthew Ehrlich, a journalism professor at the University of Illinois, wrote that “there seems to be two questions here: one, should the applause have been left in after the first soundbite, and two, why did Fox do what it did.”

“Concerning the first question, yes, the applause should have been left in after the bite. Journalists should strive to present as accurate a depiction of an event as they can. If a viewer could plausibly get the wrong impression from viewing the web story (that the president was met with stony silence or unaccountably stopped speaking for several moments), then the story wasn’t edited as well as it should have been.

“Concerning the second question, I can’t say for certain, but I do find Fox’s explanation as quoted on the Mediaite website plausible. Networks routinely pull excerpts from a speech and make them available to affiliates via satellite or other means to use in local newscasts. Those bites do routinely have video padding at the end without sound to make for smooth on-air transitions (producers and directors want to avoid accidentally ‘going to black’ or ‘upcutting’ audio by having an anchor accidentally talk over something else). In this case, it may very well have been that the editor simply slapped together two of those excerpts on the website without thinking about the missing applause at the end of the first excerpt. That doesn’t excuse it (particularly since it just looks odd to see the president standing there silently), but it wasn’t necessarily intentional.”

Al Tompkins, the broadcast/online leader at the Poynter Institute wrote in an e-mail to StinkyJournalism:

“Video editing requires the same level of care and ethical decision-making as copy editing.  The goal of the video editor should be to maintain context and accuracy even while compressing time or space.
In this case, it would be reasonable for a viewer to believe nobody clapped in that awkward space in which President Obama stood silently.  Clearly that is not what happened.

“It may well be that what Fox said happened actually did happen, without ill-intent.  It would not be unusual for a video soundbite to have some silent padding underneath at the end–room for the director to cut back to the an air talent. But that is not an excuse for what could easily be misleading video online.”