Free Lecture on Graphic Photos in the Media at Univ. of Arkansas - iMediaEthics

Free Lecture on Graphic Photos in the Media at Univ. of Arkansas 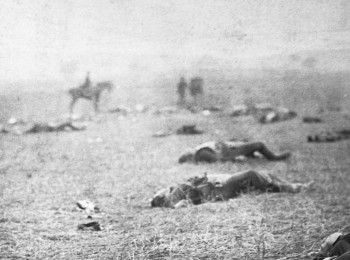 Detail of iconic photo of the Battle of Gettysburg. (Credit: Timothy H. O’Sullivan)

In Arkansas and want to know more about why and how journalists choose images for publication?

That issue is at the center of an upcoming free public lecture, “Photographs that Changed Us,” at the Univ. of Arkansas, given by the university’s Visiting Distinguished Professor of Journalism Ethics, David Handschuh, according to a press release from the university.

“In a split second a photograph can give us a tangible reminder of what happened in the world at that moment,” Handschuh is quoted as saying.

In the press release, Patsy Watkins, Center for Ethics in Journalism Committee Member, pointed to the recent cases of readily available graphic images in the media. “The news media has faced these questions recently with photos from the Boston Marathon bombing, the filmed execution of Americans by ISIS, the shooting of two broadcast journalists and the drowning death of 3-year-old Syrian child,” Watkins said.

The lecture is Oct. 7 at 7 p.m. at the university’s alumni house in Fayetteville. “No registration is needed, but we are encouraging everyone to mark they are attending the Facebook event,” the university’s assistant director for the Center of Ethics in Journalism Bobbie Jo Foster told iMediaEthics by e-mail. “We will use the event page to send out more information as the event gets closer.”

Foster added that Handschuh “plans to cover famous photographs during the lecture including Ohio State and the Tiananmen Square photos.”

Handschuh told iMediaEthics by e-mail: “We’ll be looking at historical and contemporary images and talking about the impact they’ve had on public policy, history and the images makers themselves.  Joining us via Skype will be Pulitzer prize winner John Filo, who took the iconic image from Kent State and  Jeff Widener, known for the ‘Tank Man’ photo from Tiananmen Square.”

Gene Foreman was the first Visiting Distinguished Professor of Ethics in Journalism at the university, appointed in 2013, as iMediaEthics previously wrote. Last year’s appointment was Deborah Potter, who founded NewsLab.org.

Handschuh is a former president of the National Press Photographers Association, recipient of a DART fellowship and a Poynter Media Ethics Fellow, according to a September press release about Handschuh’s appointment.

Free Lecture on Graphic Photos in the Media at Univ. of Arkansas