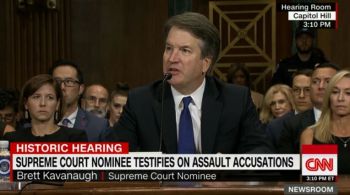 Brett Kavanaugh during his hearing in September. (Credit: YouTube/CNN/screenshot)

It may seem surprising that a Gallup poll last week (before the Brett Kavanaugh/Dr. Christine Blasey Ford hearings) reported the highest favorability ratings for the Republican Party in seven years. Moreover, the rating was nine points higher than a year ago, and – according to the author – Republicans have a higher rating than Democrats, 45% to 44%, respectively. (Actually, the ratings are essentially tied: 44.8% for Republicans, 44.4% for Democrats – less than half a percentage point difference).

The news was immediately picked up by other news media, such as CNN, Newsweek, The Hill, FOX, The New York Post, The Washington Times, The Business Insider, and numerous others. Also noting the results was President Trump, who welcomed the news, though he exaggerated a bit, tweeting that Republicans were “3 points higher than Democrats!”

The news was startling because several other polling indicators all point to a “blue wave” in 2018, with Democrats leading Republicans significantly in the generic ballot. That metric reflects which party voters want to win majority control of the U.S. House of Representatives.

Gallup’s own poll, which included both the favorability ratings and the generic ballot, shows Democrats leading by 9 percentage points, up from 5 points last June.

According to FiveThirtyEight.com, Democrats need to win the national vote by 5.6 points to take the house. That website shows Democrats leading by a slightly larger margin than what the other two websites show – 8.5 points. The FiveThirtyEight model thus gives Democrats an 80 percent chance to win majority control.

And according to the Cook Report, Democrats have a solid hold on 182 seats, plus 10 more that are likely. Republicans have 147 solid seats, plus 51 that are likely. The key for the outcome is the large number of toss-up seats: 45, 3 of them belonging to Democrats, but 42 belonging to Republicans. A former lawyer for House Republicans points to that differential in vulnerable seats as yet another metric of “a possible midterm blue wave.”

So, how do we interpret the Gallup favorability results, which seem to run contrary to other poll indicators (including their own generic ballot measure) as well as analyses of each congressional district?

The author, Jim Norman, the former polling director for USA Today, suggested the results are a good sign.

“No matter how much or how little party favorability affects elections, the fact that Republicans are more likely to view their party favorably than a year ago can be considered a positive indicator for the party, particularly if a more positive image boosts Republican turnout.”

He appears to be saying that even if these ratings don’t affect the midterm elections, they are positive for the GOP – especially if they affect the elections (by boosting turnout).

The problem here is that there is little evidence that the parties’ favorability ratings mean very much with respect to the elections, at least for the last two midterms. It might seem logical that a higher rating is better than a lower rating, but the data don’t seem to support that supposition.

In 2010, when Republicans gained 63 seats in the House, and in 2014, when the GOP swept to “the largest Republican majority in the entire country in nearly a century” and increased its majority in the House, Gallup showed the two parties with essentially equal favorability ratings. Republicans led 45% to 43% right before the election in 2010, while Democrats led 42% to 40% right before the election in the year of its phenomenal defeat.

The reason the favorability ratings may not generally predict election outcomes is that the ratings are of a national population sample, not a voter sample. Turnout figures in 2010 and 2014 were 41% and 36%, respectively.

No doubt Republicans turned out in larger numbers than did Democrats in those years, accounting for the discrepancy between the favorability ratings among the whole adult population and the election results among less than a majority of the population.  Perhaps had all Americans voted, the results would have been more balanced between the two parties, as the ratings suggested.

In his final paragraph, Norman acknowledges that the favorability ratings may tell us little about the upcoming election. He notes that

“Democrats have been buoyed by numerous projections that they will make major gains in November, which could lead to a result similar to what Republicans experienced in 2010, when they scored a big election victory at a time when favorable views of both parties were about the same.”

So, what should the news media, President Trump and the rest of us make of the parties’ favorability ratings among the general population?

As Norman implies: Not much.