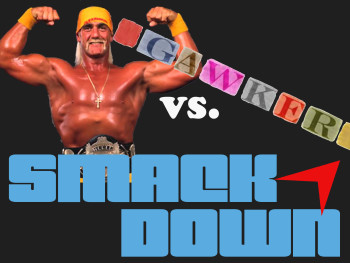 In March, Gawker lost a jury trial and was ordered to pay Hulk Hogan, aka Terry Bollea, $140 million for invasion of privacy after publishing an excerpt of a sex tape showing the former wrestler having sex with his friend’s wife. It turned out Peter Thiel bankrolled the case.

Today, Gawker tried to get the verdict either reduced or thrown out, but Florida judge Pamela Campbell said no, the Hollywood Reporter and the New York Times reported. Gawker pointed out that “no other Florida defendant had been awarded such large sums in similar cases,” the Times reported, but the judge said the cases weren’t comparable because they related to medical matters.

“We look forward to the legal process continuing and expect to be vindicated,” Gawker said in a statement sent to iMediaEthics. “Just days after Gawker Media’s site Gizmodo exposed that Facebook’s news section has suppressed certain points of view, we’ve now learned that a Facebook board member and a major funder of The Committee to Protect Journalists has been secretly funding a legal campaign against our journalists. There are very serious questions about whether Hulk Hogan financially benefitted and this case is far from over.”

According to Capital New York, Gawker’s next step is appealing to Florida’s Second Distract Court of Appeal.

The judge also wouldn’t consider new information — reports yesterday from Forbes and the New York Times alleging that PayPal co-founder Peter Thiel paid for Hogan’s case against Gawker, which would be legal. The New York Times noted that Gawker outed Thiel in 2007 as gay and Thiel called one of Gawker’s websites “the Silicon Valley equivalent of Al Qaeda.”

Forbes‘ story broke the story, based on anonymous sources, reporting that Thiel “has played a lead role in bankrolling the cases Terry Bollea, a.k.a. Hogan, brought against” Gawker, but noting that Thiel’s spokesperson didn’t comment.

Forbes also pointed out that Bollea’s lawyer Charles Harder “is also representing plaintiffs against Gawker in other lawsuits.”

After the Forbes and Times reports, Gawker issued a statement reading:

“According to these reports, a board member of Facebook and a major funder of The Committee to Protect Journalists has been secretly funding a legal campaign against our journalists. We trust the appeals court will correct the outsized Florida jury verdict and reaffirm the law that protects a free and critical press, which is more embattled and important than ever.”

iMediaEthics has written to  Harder and Thiel’s rep for comment.