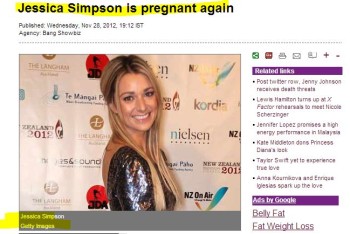 See above a screenshot from DNA India's report earlier this morning. The photo of Erin Simpson has since been replaced with a photo of Jessica Simpson. (Credit: DNA India, screenshot)

A Getty Image photo wrongly identifying its subject as Jessica Simpson resulted in an error by the daily newspaper DNA India, iMediaEthics discovered this morning.

Megan Richards, a spokesperson for TVNZ, the station for which Erin Simpson works, confirmed with iMediaEthics by email that the woman pictured is Erin Simpson.

But, Getty Images corrected its caption after iMediaEthics asked about the error.  The new caption replaces Jessica Simpson’s name with Erin Simpson’s.  iMediaEthics wrote to Getty asking about this and any corrections. Getty Images Public Relations Manager Jodi Einhorn told iMediaEthics by email:

“When Getty Images was made aware of the caption, it was immediately corrected on our website.”

The photo caption as it appears on Getty’s website now identifies the woman as Erin Simpson, but doesn’t have a correction note.  The hyperlink for the photo also has been changed from (emphasis ours)

We’ve asked Einhorn if Getty has issued any corrections, especially over the wire, for this error, but haven’t had any response as of publication time. We’ll update with any news.

DNA India has since changed its photo to an actual photo of Jessica Simpson, but there’s no correction or notice of the change.

iMediaEthics has written to DNA India asking for a correction and what prompted the photo change. iMediaEthics will update with any response.