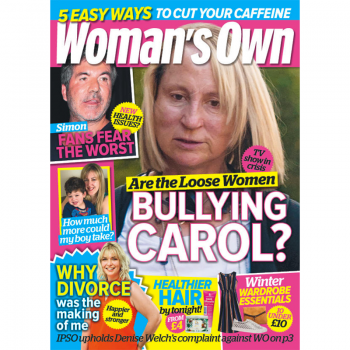 UK women’s weekly magazine Woman’s Own accused actress and TV host Denise Welch of having “diva demands” and claimed other TV hosts didn’t want to work with her.

Those claims were based on an anonymous source, and the magazine didn’t contact her for a response. Welch complained to the UK press regulator, the Independent Press Standards Organisation, arguing the article was “purely to humiliate, degrade and embarrass me,” the Guardian reported.

The July 2 article was headlined, “Dive Denise/Denise’s Diva demands.” It claimed, according to the IPSO ruling, that Welch had “a long list of requests if the show’s producers want her back for good” on  Loose Women.  The article claimed Welch wanted a “permanent spot” on the show, wouldn’t work with “certain people,” wouldn’t “be outdone by celebrity guests,” and wanted different lighting, more money and a contract.

IPSO required the magazine to publish on its front page in a large headline that IPSO ruled against it, as well as publish a correction. IPSO said that Woman’s Own didn’t take “care over the accuracy of the article” because it didn’t verify its anonymous source’s claims or contact Welch for comment.

“This was compounded by two factors: the high degree of prominence given to the claims, and their adoption as fact by the publication. The claim that the complainant had acted as a ‘diva’ making ‘shock demands’ appeared on the front cover,” IPSO ruled. “The article had attributed a number of claims regarding the alleged ‘demands’ to a source, but the front cover trail, article headline and initial paragraphs adopted the claims as fact and used them as the basis for characterising the complainant as a ‘diva.'”

The apology that the magazine must publish reads:

“APOLOGY AND CORRECTION: An article in the 2 July edition of Woman Magazine regarding Denise Welch contained inaccurate statements. By way of correction and clarification we would like to make it clear that Denise has made no unreasonable or ‘Diva’ type demands regarding a return to Loose Women. It is not correct that Denise has made any demands regarding contracts, increased payments, other celebrity guests, airtime or studio lighting. In addition, any suggestion that the Loose Women producers do not want Denise back is also incorrect. We apologise for the distress that our article caused.”

iMediaEthics has contacted Woman’s Own and Welch’s representative for more information.

Welch’s representative Bex Elliff provided iMediaEthics with quotes from Welch saying the story was “very hurtful and embarrassing” and that she “decided it was the right time to make a stand which would make publications like this think twice in the future.”

Welch also said, “They irresponsibly printed a false story on their front cover for commercial purposes but when they were given the truth they wanted to hide it on page three.”

“We may not have a right to privacy in the way other people do but we have a right that a source cannot wake up one day and make up two pages of lies which is trailed on the front page,” Welch said, according to the Guardian. “Covers have a ripple effect. When you’re at the Sainsbury’s till those covers are in people’s faces and seen by people who in a million years would never buy Woman’s Own. It goes into people’s subconscious.”