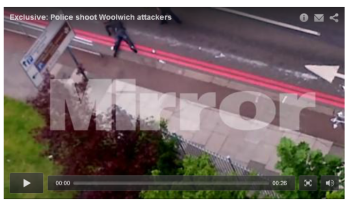 The UK broadcast regulator has finished its investigation of complaints against media outlets that aired a graphic video of the men who attacked and killed soldier Lee Rigby in May in Woolwich.

As iMediaEthics wrote last year, viewers complained after news outlets including ITV, The Guardian and The Sun published online or on TV the video of one of Rigby’s attackers holding a bloody cleaver just after the attack. The man also gave a “politically-charged diatribe” on the video, The Guardian wrote.

The Press Complaints Commission, which handles complaints against print and online publications, received 94 complaints by May 29, 2013, and The Guardian‘s readers editor got about 40 complaints over the video.

In total, Ofcom, which regulates the broadcast media, received 680 complaints over outlets that aired the clip, Ofcom’s Rhys Hurd told iMediaEthics by email Jan. 2. Next week, Ofcom will publish its full report on the complaints, Hurd told iMediaEthics. Ofcom decided to wait to publish its report until after the trial against Adebolajo and Adebowale.

“Earlier this year, Ofcom completed its investigations into the broadcast coverage of soldier Lee Rigby.  However, due to ongoing criminal proceedings, we delayed the publication of our decisions.

“On 19 December 2013, the criminal investigation concluded. Therefore we will publish the full and detailed outcome of our investigations in our next Broadcast Bulletin on 6 January 2014.

“In line with our established procedures, we will not be divulging the outcome of our investigations until we publish our Broadcast Bulletin.”

While Ofcom wouldn’t say what its ruling against outlets is yet, The Guardian reported that “It is understood that Ofcom has cleared all the broadcasters on the basis that showing the footage was in the public interest.