CNBC host: Saying everyone should be infected with coronavirus 'stupid' & 'absurd' - iMediaEthics

CNBC host: Saying everyone should be infected with coronavirus ‘stupid’ & ‘absurd’ 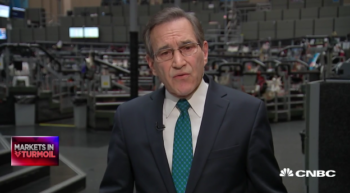 CNBC editor Rick Santelli apologized March 6 for his “stupid” and “absurd” comment that everyone in the U.S. should be infected with coronavirus.

On March 5, Santelli said, according to The Hill “But maybe we’d be just better off if we gave it to everybody, and then in a month it would be over because the mortality rate of this probably isn’t going to be any different if we did it that way than the long-term picture, but the difference is we’re wreaking havoc on global and domestic economies.”

“It was the dumbest most ignorant stupid thing anyone could have ever said. What was in my mind at the time, when I was young, if you got measles, chickenpox, mumps, my parents and other parents would not only put family together sometimes they’d bring other students together to expediate the process,” Santelli continued.

He ended: “It was just a stupid thing to say. It is not appropriate in this instance, and we are resilient, both in the United States and in the globe, and that resilience will get us through. The idea of something so absurd — I just apologize, and I apologize to everyone on this segment and all my peers at CNBC. We will get through this. We are resilient. But even if one life is affected, I do apologize for my insensitivity.”

iMediaEthics has written to CNBC.

CNBC host: Saying everyone should be infected with coronavirus ‘stupid’ & ‘absurd’