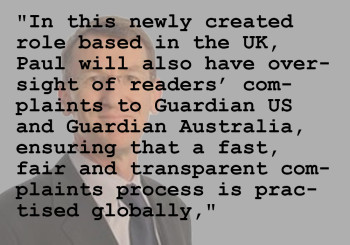 Reflecting its move to a more global news outlet, the UK Guardian now has a global readers editor.

Chadwick has no term limit and will assume his new post in June 2016, the Guardian told iMediaEthics. The e-mail for contacting his office is guardian.readers@theguardian.com. The Guardian confirmed that the news won’t affect the newspaper’s sister publication, the Observer, which will keep its current readers editor, Stephen Pritchard.

The Guardian has expanded to Australia and the U.S. in recent years.

“In this newly created role based in the UK, Paul will also have oversight of readers’ complaints to Guardian US and Guardian Australia, ensuring that a fast, fair and transparent complaints process is practised globally,” the Guardian said in a press release, noting that Chadwick is accountable to The Scott Trust, the only shareholder of the Guardian Media Group.

By doing so, Chadwick’s position is “maintaining independence and impartiality for the Guardian’s internal complaints processes,” the press release said.

The Guardian‘s previous readers’ editor was Chris Elliott, who was appointed in 2010 after more than a decade with the newspaper.

Elliott will now be a consultant for Impress, a new press regulator getting started in the UK to rival the Independent Press Standards Organization. Read more about Impress here.