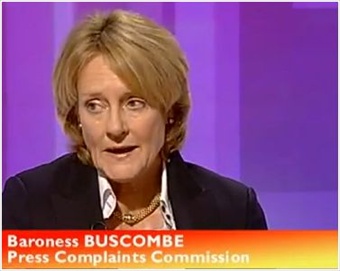 Baroness Peta Buscombe announced this morning that she would step down, despite having several months left in her three-year term.  She will continue to lead the PCC while her replacement is found, according to her statement. (See here.)  Catherine Speller from the PCC told StinkyJournalism via e-mail that “the statement explains that the recruitment process will get underway straightaway and Baroness Buscombe will step down once a replacement has been found.”

Buscombe said she is “very proud of her work at the PCC” and that after she steps down she will be “a campaigner for change from outside the organisation.”

She called for “stronger powers” for the Press Complaints Commission and continued press freedom.

“In this world of shifting media provision, I am convinced the answer to ethical concerns about the press is not statutory intervention. What is needed is a greater sense of accountability among editors and proprietors. A PCC with increased powers and reach remains the best way of achieving that.”

Buscombe did not mention the UK phone hacking scandal in her resignation announcement.

In a statement, the PCC expressed gratitude to Buscombe and commented that she “made a major contribution to the PCC.” The PCC statement noted that the Press Standards Board of Finance will choose Buscombe’s replacement. The PCC’s Catherine Speller told StinkyJournalism via e-mail that “the PCC is not commenting further to the response it gave following Baroness Buscombe’s announcement this morning.”

The Guardian’s Roy Greenslade commented that Buscombe has been “on the back foot” since her 2009 statements in the PCC report on phone hacking that criticized the Guardian’s “dramatic billing” of allegations that phone hacking at the News of the World was “widespread.”

Greenslade did note that the commission “did improve under her watch in all sorts of ways,” but also suggested she was “pushed into resigning” as an effort to signal change in the PCC.

As StinkyJournalism previously wrote, the Press Complaints Commission has been criticized for its failure to thoroughly investigate the 2009 allegations of phone hacking.  In its 2009 report, the PCC claimed there was “no new evidence of phone hacking” at News of the World.  The PCC retracted its 2009 report in early July.

The BBC noted that Buscombe “withstood calls to resign” in late 2009 “after she questioned lawyer Mark Lewis’s evidence to MPs over phone-hacking allegations at the News of the World (NoW).”

As a result, Lewis sued the PCC and Buscombe for libel, according to the BBC.  A 2010 Guardian report notes that Buscombe and the PCC settled with Lewis and paid him an undisclosed “sum for damages and legal costs.”  According to that report, the lawsuit “is believed to be the first successful libel action brought against the press watchdog.”

iMediaEthics wrote last week about the debate over the Press Complaints Commission in light of the phone hacking scandal.