Hey NYDaily News! How is Suri Cruise Crying about a Puppy a Front-Page News

Hey NYDaily News! How is Suri Cruise Crying about a Puppy a Front-Page News Story? 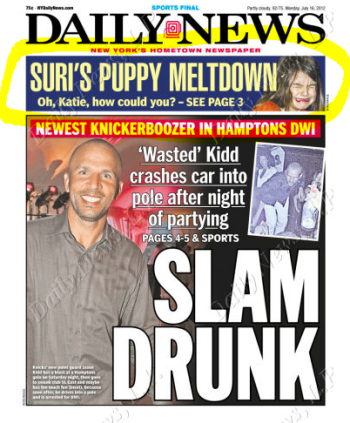 The New York Daily News devoted its entire June 16 Page 3 to a story about, and photos of, Tom Cruise and Katie Holmes’ 6-year-old daughter Suri Cruise having a “tantrum!”

Four photos showed the child looking sad and eventually bursting into tears.  The accompanying story reports that Katie Holmes “apparently refused to buy Suri an adorable puppy she really, really wanted” and how pictures showed her crying.  However, the Daily News distanced itself from promising the photos were really Suri Cruise crying over not getting a dog, writing the photos show “what appeared to be a mommy-I-hate-you tantrum.”

The Daily News also distanced itself from saying that the 6-year-old really did want and not get the puppy writing Holmes “apparently refused.”

See the print version of the report scanned in here. The online story and other photos of Holmes with Suri Cruise in a pet store are here.

Lest we forget, famous or not, Suri Cruise is a child, and iMediaEthics finds it disappointing to see the Daily News, the fourth-largest U.S. newspaper and a Pulitzer Prize winner, spending a full print page on invasive stories and photos of a crying child instead of maybe … actual news.  We have written to the Daily News asking why and will update with any response.  We’ve also written to SPJ Ethics Committee chair Kevin Smith for comment and will update with any response.

The Daily News isn’t the only outlet to report on Suri’s being upset, though. ABC News’ blogged about the incident,  as did the Vancouver Sun, both outlets that based their reports off the Daily News’.  The Hindustan Times, Marie Claire and a variety of entertainment sites also wrote stories about the alleged crying-over-the-denied-puppy incident.

We recently detailed how news outlets including the Daily News were hoaxed into using a fake video of the Drake-Chris Brown fight in coverage of the brawl.   And last year, we questioned why the Daily News stooped to publishing 198 bad images of celebrities, including photos of Blake Lively’s pimple, Prince William apparently picking his nose, and Courtney Love on an ambulance gurney outside her apartment.

In a related story, Tom Cruise’s lawyer has threatened to sue the tabloid National Enquirer if it doesn’t retract a report “Inside Tom’s House of Horrors!” Gossip Cop reported.

Cruise’s lawyer, Bertram Fields, wrote in a letter to the tabloid, published here on The Hollywood Reporter’s website, that the article had “numerous false and defamatory assertions about” Cruise.

Fields detailed a series of claims he said were false including that Cruise is “a monster,” his recently ended marriage to Katie Holmes was “a living nightmare,” that Cruise “engaged in any ‘abuse’ or ‘humiliation’ of Katie Holmes,” and that Holmes “was almost treated like a battered wife.”

Fields called for the Enquirer to prominently retract its report, writing:

“Without limited any of Mr. Cruise’s rights or remedies for the enormous damages you have caused him, please consider this a demand that you immediately retract each and every one of your false assertions about Mr. Cruise with the same prominence and emphasis as you gave your original false and defamatory assertions.”

The Hollywood Reporter noted that prior to the Enquirer‘s publication,  Fields’s law firm contacted the tabloid’s publishing company calling it “the most defamatory cover the Enquirer has ever done” and called for the tabloid to hold publication.

We wrote last year when Star magazine ran a front-page apology to Holmes after an earlier report that suggested she was “a drug addict or was undergoing treatment for a drug addiction,” and that “equated her fondness for Church of Scientology e-meter treatments to a serious drug addiction.”  Star also noted it gave a “substantial donation to charity on Ms. Holmes’ behalf.”

Hey NYDaily News! How is Suri Cruise Crying about a Puppy a Front-Page News Story?