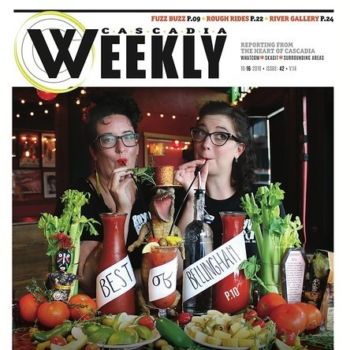 The Cascadia Weekly, a Bellingham, Washington newspaper, apologized last month, admitting it re-published film reviews without the permission of authors. Essentially, the paper explained it re-published content without a license or the authors’ consent, but that it did give credit.

“All feature reviews were bylined and sourced, and our intent was never to deprive or defraud these authors of credit for their work,” the publisher Tim Johnson wrote in a Sept. 18 apology. “Cascadia Weekly received no revenue or remit from these reviews, which were offered as service to readers. These were licensed products for which we did not hold a license.”

Despite the apology, Johnson reasoned that the newspaper staff doesn’t have time with their deadline to get permission, and “Our sin was promotion; and in particular promotion of the many fine, small-distribution independent films of limited circulation that arrive each month at our arthouse theaters, and that deserve attention in our community.” The paper is now deleting content from its archives to rectify the matter, and isn’t publishing any new feature film reviews.

iMediaEthics asked Johnson how many reviews have been deleted. His response:

“I am afraid I cannot answer that question definitively, and see below.
There were many. At my instruction, we have removed all
reviews–whatever their status or origin–from our online product until
this question can be quantified and resolved. We also retain PDF
archives of our printed product. We are responding to specific requests
to delete content from those.

Johnson said one writer complained about the use of her work which prompted the apology, but no writers have threatened legal action. However, “four publishers have issued cease and desist orders, and we have complied with their directives,” he wrote.

Johnson added that he didn’t know how long the newspaper had been lifting reviews. He explained:

“Frankly, I do not know. It was my understanding that the editor in
charge of this section had a stable of available writers from whom she
had asked permission to republish their work, which was in syndication
or was obtaining them through a Creative Commons license. We subscribe to a number of syndication services with a large variety of content.

“Our practice is to obtain consent, or use licensed or original material. It turns out that I was very foolish for believing this editor was
handling material in a proper manner; however, that does not matter as I am ultimately responsible for the material we produce. The editor has
been removed from her desk. She offered to resign, but I chose not to
accept that resignation because, again, I am responsible. In coming days
we will need an experienced team.

“This has been an enormously humiliating experience for me as publisher, and I apologize to all we have wronged.”

According to Johnson, Cascadia Weekly has a staff of five and circulation of 18,000.

In his online apology, Johnson wrote,

“The simple truth is, rather than surrender to the evident realities of distribution and provide little information at all on these excellent films, we chose to publish feature reviews without securing permission from their authors. We were wrong to do so.

“Over time, we grew indiscriminate in sources and careless in purpose. On several occasions, we published feature reviews for a major motion picture release without license or permission, which violated any original purpose—however misguided—to point reader attention to smaller release films. Wrong became routine. Of all our failures, this last point is our most egregious.”