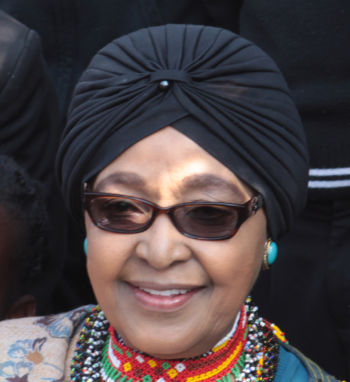 Madikizela-Mandela, who died in April, also claimed Harber’s former publication Weekly Mail of being “anti-me and anti-ANC” (African National Congress), and it “actually did the job for Stratcom,” which was apartheid’s “covert strategic communications (Stratcom) operation.”

Meanwhile, Gqubule responded saying her work “exposed Stratcom” and “I don’t know where this mischievous narrative that we are Stratcom comes from.” Gqubule added, according to South Africa’s Mail and Guardian, “As the Huffington Post admits, that was completely against every prescript of journalism and even against the press code to which they subscribe. The damage done, or rather the damage they attempted to do which I’m now trying to undo has been humongous. It’s difficult to even quantify.”

The Huff Post South Africa’s editor Pieter du Toit’s apology admitted, “We failed to seek out comment from Harber, Gqubule and Mathiane before publishing the untested allegations by Madikizela-Mandela, and we failed to provide proper context to the history.”

Du Toit claimed the video was “newswothy” and not “a literal accusation.”

“There was no ill-intent, nor was the intention to expose journalists,” he continued. “We subscribe to the Press Code of South Africa and adhere to the HuffPost mission statement. Upon reflection, we feel that the publication of the video is not in keeping with the spirit of those guidelines.”

Further, he said that the Weekly Mail was “the preeminient anti-apartheid newspaper” and added, “We recognise the role of Harber, Gqubule and Mathiane as campaigning anti-apartheid journalists and as leaders of our craft. We are deeply sorry and apologise without reservation.”

Harber told iMediaEthics that he contacted an editor at the HuffPost when he saw the video and he received a phone call apology from Du Toit, who promised to remove the video. “When I saw the apology, which covered only the fact that they had not sought my opinion, I wrote to him to say that it was inadequate, as it failed to say that there had been no factual basis for the allegation,” Harber told iMediaEthics. “I said that if it did not make clear the allegations were untrue, I would be forced to take ‘further action’, unspecified. He took down that apology and replaced it with the one that is currently up.”

Harber said he is now “satisfied with the apology” and his “inclination is to move on and put this behind me.” Likewise, Mathiane told iMediaEthics she hasn’t decided what, if anything, she will do in response to the HuffPost video but noted “of course, the clip did unsettle me.”

iMediaEthics wrote in 2016 when Gqubule was one of three journalists suspended by South African Broadcasting Corp. after they disagreed with the broadcaster’s order not to cover protests of the SABC.