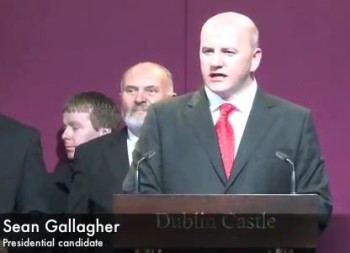 The Broadcasting Authority of Ireland upheld former Irish presidential candidate Sean Gallagher’s complaint over RTE’s airing the contents of a tweet that turned out to be phony during a presidential debate, the Irish Independent reported.

As we wrote in December, Gallagher complained to the Broadcasting Authority because he was “the clear frontrunner” in the Irish presidentail candidate race prior to RTE’s Oct. 24 debate. During the debate, political party Sinn Fein’s presidential candidate Martin McGuiness claimed Gallagher took a  €5,000 check, which Gallagher denied.  Then, after a commercial break, RTE’s host Pat Kenny reported on air that Sinn Fein tweeted from the account @mcguinness4pres that it would “produce the man who gave [Gallagher] the cheque for five grand” and confronted Gallagher about the accusations.  However, the tweet was found to be phony during the on-air debate, but RTE didn’t report that. Further, Gallagher questioned RTE’s fact checking because the tweet was broadcast ten minutes after being tweeted. Gallagher ended up losing the election.

The Irish Independent called the Broadcasting Authority’s decision a “half-victory” for Gallagher because while the authority “upheld” his complaint, the authority won’t conduct a “full investigation or public hearings into the incident.”

As the Independent explained, the Broadcasting Authority determined RTE’s reading the tweet “was unfair to Mr Gallagher.” The Broadcasting Authority noted that RTE didn’t make any “apparent efforts..to verify the source and accuracy” of the information and that RTE failed the tell viewers that Sinn Fein “distanced itself from the tweet” in the same time span of the program.

Because of the Broadcasting Authority’s decision, RTE must “broadcasting an announcement detailing the BAI’s ruling,” according to the Irish Independent.  RTE’s director general Noel Curran also apologized directly to Gallagher.

Curran defended RTE’s action in the incident, arguing that no one “deliberately concealed information” concerned with the tweets.

On the ruling, Gallagher is quoted as saying:

“This public service broadcaster introduced, in a grossly unfair manner, a controversial and bogus tweet into a crucial and live presidential election debate, just days before polling, without first having verified where it came from and whether it was in fact genuine.

“RTE then compounded this unfairness by consciously withholding a corrective tweet.  It is, and should be, a matter of grave public concern that RTE, as a public service provider, should make two such fundamental errors.”

The Irish Times noted that “a spokesman” said Gallagher “was very satisfied with the full apology from RTE’s board.”

As a result of the ruling, RTE will have “an intensive review process” according to the Irish Times.  In a March 9 press release, RTE said its board “fully accepts the findings of the BAI in this matter.”

“The Board noted that the Director General has confirmed that measures and activities are now  in train to ensure that the internal rules and regulations of RTÉ meet the best standards of journalism and current affairs coverage.  A new, full set of Programme Makers’ Guidelines is  being finalised. It will include protocols governing the uses in RTÉ’s journalism, and particularly in live programmes, of material sourced from Social Media.”

We have written to RTE for more information about its new policy guidelines and will update with any response.

RTE’s reporting has been called into question several times in the last six months. In October, RTE apologized on air on at least two occasions and paid a substantial libel settlement to Catholic priest Father Kevin Reynolds after wrongly reporting in its “Mission to Prey” program that he impregnated an underage girl.  Prior to RTE’s aired report, Father Reynolds denied the claims and even offered to take a paternity test, which RTE declined. The RTE report led father Reynolds to be “removed” from his parish, but after RTE’s apology, he was reinstated. The incident prompted three investigations into RTE’s reporting and caused RTE’s news managing director and current affairs editor to “temporarily” step down.

In November, the family of deceased Brother Gerard Dillon challenged RTE for its claim in the same “Mission to Prey” program that he sexually abused a student in South Africa.  Brother Dillon’s family called for RTE to retract or prove its claim. And last month, former Archbishop Richard Burke claimed RTE libeled him in that “Mission to Prey” report by reporting he sexually abused a minor-aged girl. In that case, Burke admits to having a relationship with the woman in question; however, he claims she was of legal age and “the relationship was consensual.”