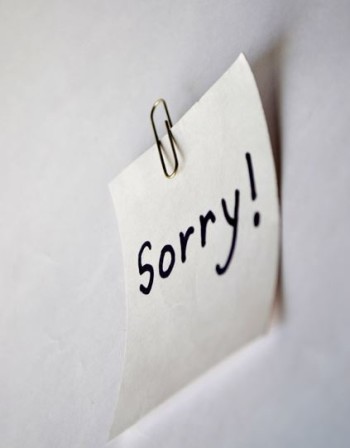 Earlier this year, Irish court news service CCC.Nuacht and the Irish Independent newspaper sued TheLiberal.ie for copyright infringement, alleging plagiarism, as iMediaEthics reported. CCC.Nuacht’s editor told iMediaEthics there were “many more” than four articles in question but the lawsuit only focused on four.

This month, Irish news site TheLiberal.ie has settled the lawsuit, posted an apology and must now pay both journalism outlets after misusing photos and crime stories. But, the apology hasn’t satisfied at least one of the two outlets.

TheLiberal.ie founder, Leo Sherlock, published an apology on his site admitting to having “infringed copyright” by using photos from the Irish Independent and four stories from Irish court news service CCC.Nuacht, but pulled a fast one by running the apology in a barely legible pale pink font.

In addition, in a further sleight of hand, the apology is an image, not plain HTML text, so it “cannot be highlighted, copied or found via search engines,” the Irish Times reported. We have typed it out and put it in black font so that it can be read and found by search. It is included at the bottom of this story.

See below a screenshot of a portion of the apology. 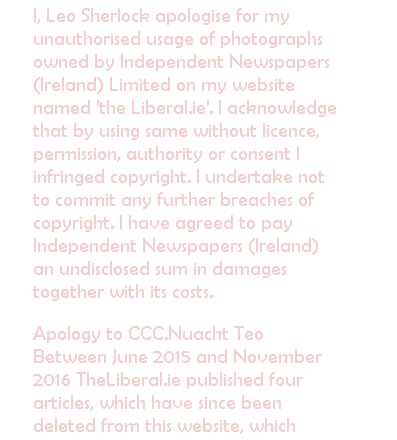 A portion of TheLiberal’s apology.

In a story accompanying the apology, theLiberal.ie provides excuses that will be picked up by Google search as they aren’t included in an image. The site claimed “very young” and inexperienced writers were responsible.

The article continued, criticizing the news outlets for being upset about the misuse of the work, claiming “This was not done in a malicious fashion and the terrible emotional hurt which appears to have been caused to a large global media organisation is particularly striking.”

Further, theLiberal.ie argued it didn’t think there was any copyright for court news but would start its own competing court reporting service. “Information pertaining to decisions taken in Irish courts is something TheLiberal.ie feels should not be owned by anyone,” theLiberal.ie stated.

CCC.Nuacht’s solicitor, Rossa McMahon, confirmed the settlement in a statement sent to iMediaEthics by e-mail:

“My client CCC.Nuacht Teo agreed to terms with Mr Sherlock to settle an action against him for copyright infringement involving TheLiberal.ie. Those proceedings arose out of articles entirely written by my client’s reporters which were copied and published on TheLiberal.ie without license or payment. These articles were reports of criminal proceedings written by expert court reporters who attended the criminal proceedings reported on. In its work, my client has consistently championed greater public access to court proceedings, even to the point where CCC Nuacht has brought legal proceedings to challenge reporting restrictions. My client is proud of it’s record of ensuring decisions taken in Irish courts are disseminated to the public in a fair, accurate and unbiased manner.

“The settlement terms with Mr Sherlock include that he publish an apology to my client, in agreed terms and as a news story at the top of the main page of TheLiberal.ie website. The proceedings against Mr Sherlock were adjourned to Ardee District Court on 11 September 2017 for implementation of them. My client is considering its position and in light of the fact that the proceedings remain before the Court will not make any further comment.”

The full apology from TheLiberal.ie reads,

“I, Leo Sherlock apologise for my unauthorised usage of photographs owned by Independent Newspapers (Ireland) Limited on my website named ‘the Liberal.ie’. I acknowledge that by using same without licence, permission, authority or consent I infringed copyright. I undertake not to commit any further breaches of copyright. I have agreed to pay Independent Newspapers (Ireland) an undisclosed sum in damages together with its costs.”

“Between June 2015 and November 2016 TheLiberal.ie published four articles, which have since been deleted from this website, which reproduced or adapted articles by CCC.Nuacht, a leading Irish court news agency whose stories appear in Irish media outlets. I on behalf of TheLiberal.ie acknowledge that these articles were published without obtaining a licence to do so and that they thereby infringed the copyright of CCC.Nuacht.

“I acknowledge the important work of court reporters in informing the public about court proceedings and in furthering the administration and justice in public as required by the Constitution. I on behalf of TheLiberal.ie apologise to CCC.Nuacht and its court reporters for publishing these stories without obtaining and paying for a licence entitling them to do so and I undertake that neither I nor TheLiberal.ie will publish or adapt any further copyright materials owned by CCC.Nuacht without licence.”