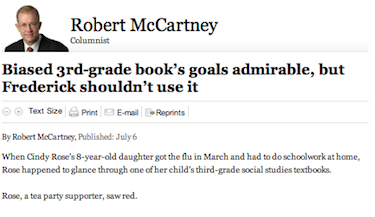 The Washington Post published one column in its reporting on the accusations of liberal bias in a textbook used in a Maryland school. (Credit: Washington Post, screenshot)

Is the Washington Post giving unfair coverage to claims that textbooks are biased?

iMEdiaEthics received a complaint from Washington Post reader Glenn Merritt, who claimed that the Post has devoted more coverage to allegations of conservative bias than liberal bias in education.

Case in point: The Post ran a July 7 article in its Local section by Robert McCartney about a parent’s claim that a third-grade textbook in Maryland’s Frederick County was too liberal.

Merritt criticized the Post for only devoting one article to the book accused of being too liberal, while the Post has extensively covered earlier cases alleging conservative bias in textbooks. He called the difference a “double standard” in reporting.

Merritt has previously come to iMediaEthics with other complaints regarding the Washington Post.

Rose, whose daughter attends a school in the Frederick public school system, claimed that the textbook “pushes an agenda of socialism” in its portrayal of universal health care and childcare as a benefit to society.  The textbook, published by TCI Publishing, is used in her daughter’s third-grade social studies classroom, the Washington Post explained.

She also criticized the book’s statement that “the United States consists of 50 states, and makes no mention of the District of Columbia,” according to the Frederick News Post.

The Washington Times reported that one chapter “explains how many Americans struggle to pay for health care.” It reportedly describes universal health care in other countries like “Canada and Sweden” as low-cost or “free of charge” without describing the role of taxpayers in paying for these services.  By doing so, “critics have argued the text endorses expanded government but fails to fully explain that its public services are paid for by taxpayers.”

The textbook approaches the issue of universal child care similarly, claiming that it is expensive in the United States, but is “free or
costs very little” in other countries, the Washington Post reported.

The school board decided “not to eliminate” the textbook from schools yet, but to reconsider the textbook’s use next year “as part of a mandatory eight-year review cycle for all books,” the Washington Times reported.

Washington Post columnist Robert McCartney covered the issue for the Post.  McCartney agrees that the textbook showed a liberal
bias, though he wrote that he was skeptical of the claim at first.

Though he found that the textbook “is unmistakably slanted to the left,” he stated that he “applauds the goals that the book promotes,” which puts him “in an awkward place.”  However, he concluded that the textbook should be “revised” if schools want to continue using it.

The Post gives large coverage to conservative bias but McCartney’s piece was the only Post piece devoted to the issue, according to Merritt.

Controversy over Textbook in Virginia

In a July 11 email to the Post, Merritt noted that the Post devoted more than 20 articles to a previous controversy regarding errors in Virginia public school textbooks, primarily fourth-grade textbook “Our Virginia” and fifth/sixth-grade textbook “Our America: To 1865,” both published by Connecticut-based Five Ponds Press.

The Virginia board of Education began scrutinizing these textbooks when “Our Virginia” was criticized for its claim that “thousands of African Americans fought for the South during the Civil War,” a claim that historians deem inaccurate and is “closely linked to revisionist Confederate history,“ the Washington Post stated in an Oct. 2010 report.

The Virginia Board of Education “ordered a review by experts of any approved textbooks published by Five Ponds Press,” the Washington Post reported on Jan. 14.

After historians spotted errors in “Our Virginia” and “Our America: To 1865,” the Virginia Board of Education “withdrew its approval” for these textbooks, according to the Washington Post.

The Post printed articles on this issue in a variety of sections, including Metro, Education and Opinion. Although the Post covered that story in great detail, scrambling to “get a piece of this Confederate ‘propaganda,’” the publication is now “avoiding” the Maryland textbook story, Merritt claimed in a July 11 email to the Post.

The Washington Post also extensively covered other controversies regarding conservative bias in Texas schools, Merrritt claimed.  In a July 20 email to iMediaEthics, Merritt listed 19 Washington Post articles from 2009-2010 that show instances where Texas school systems upheld conservative standards. For example, one school board passed a measure that “removed references to capitalism and replaced them with the term ‘free-enterprise system,'” the Washington Post reported on May 22, 2010.

Merritt asked the Post why they had a “lack of enthusiasm for [the Maryland] story” when they had given more coverage to pointing out bias in those cases.

Merritt also sent a July 13 follow-up email to the ombudsman, Patrick Pexton. Pexton has not responded to the July 11 or a follow-up email on July 13, Merritt told iMediaEthics.

iMediaEthics wrote to the Washington Post  on July 21 to see if they had received Merritt’s emails.

McCartney, who wrote the Post’s column on the Maryland textbook controversy, responded to Merritt’s e-mail and copied iMediaEthics, Pexton, and Post reporters Sieff, and Strauss.  In a July 22 email that the Post gave more coverage to the Virginia textbook controversy because it affected more of the Post’s readership.

“Frederick is not part of our core circulation area, and although we have subscribers and other readers there — and we treasure them — they are not nearly as numerous as our readers in Fairfax, Loudoun and other counties where the Virginia textbooks were being used,” he wrote to iMediaEthics.

iMediaEthics asked the Post’s circulation department and public relations spokesperson for these circulation figures to verify McCartney’s statement, but Post spokesperson Kris Coratti declined to provide this information, explaining that the Post doesn’t “publicly release that type of circulation data.”

The Virginia textbook issue also involved a large number of non-partisan errors that required correction, he pointed out.   “Many — in fact, most — of the factual errors in those 2 Virginia textbooks had nothing to do with politics,” he wrote.

Merritt responded to McCartney’s email on July 25, stating that the Washington Post did treat the Virginia textbook controversy as a political issue.

In their coverage, the Post “emphasized the political angle” in the textbook’s error that “thousands of Southern blacks fought in the Confederate ranks,” Merritt stated.

iMediaEthics agrees that the Post gave exorbitant coverage to the textbook’s error on black Confederate soldiers. Doing so may have emphasized the political aspect of the story.  Of the Post’s stories on the Virginia textbook controversy, 26 of 28 stories mention the black Confederate soldiers error, and 11 of the 28 stories feature the error as the focus of the story, iMediaEthics finds.

Merritt also countered McCartney’s claim that Frederick County was not included in the Post’s “core circulation area,” saying that it was about the same distance from the Post than Loudoun.  The Frederick county seat is 48 miles from WaPo headquarters. It’s only seven miles more distant than Leesburg, the seat of Loudon County,” Merritt wrote.

iMediaEthics wrote to TCI, the publisher of the textbook in question in Maryland, to ask how many schools in the Washington metro area use the textbook. Outreach Manager Natasha Martin responded in an email that their policy “is not to release specific sales data.”

We also wrote to TCI to ask about the accusations against the textbook and to ask if the company reviews textbooks for political bias. iMediaEthics has also written to the Post’s Sieff, Strauss or Pexton.   We will update with any response.

What do you think? Does this Washington Post coverage exhibit bias?