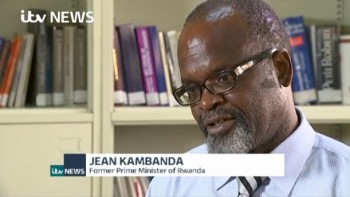 A screenshot from ITV's interview with Jean Kambanda (Credit: ITV)

ITV defended its decision to interview former Rwandan prime minister Jean Kambanda about his confession related to the 1994 Rwandan genocide.

ITV interviewed Kambanda in a Mali prison, and he claimed he was coerced into admitting he “presided over the Rwandan genocide.” It was Kambanda’s “first interview,” ITV claimed. (However, All Africa reported that Kambanda has been interviewed before in 2004 by BBC Gahuyza radio.)  “We’re the first journalists ever admitted inside,” Ray said in the video report, adding that Kambanda “lacks any sense of guilt” and was in a suit and smiling.

After the report aired, ITV issued a statement explaining its decision to air the interview and defending how it handled his claims.

The program’s “opening description of Kambanda was that he ‘presided over the Rwandan genocide,'” ITV wrote. “In the interview itself we strongly challenged the former Prime Minister’s denials. He was asked directly why he did not stop the killing, and why he distributed weapons to the Hutu killers.”

Further, ITV noted that it interviewed an expert on the Rwandan genocide as well as a nurse, it called the 800,000 killed “monstrous crimes,” and its correspondent said Kambanda’s claims would be viewed as a “self-serving attempt to re-write history.”

“The report was an example of robust and balanced, independent journalism. The report raised awareness of one of the most chilling episodes of recent African history,” ITV said. “Any interview with a controversial figure will raise difficult ethical issues. Fundamentally it is our duty to inform the public. This can include interviews with controversial individuals. This is a legitimate function of a news organisation, providing, appropriate challenges and factual context are included in the report.”

The ITV report on Kambanda by John Ray reported: “He claims, despite his conviction by a UN tribunal for crimes against humanity, that he is innocent after all.” Kambanda claimed that “he was effectively tricked into confessing.”

“You can decide for yourself which version of history you think is more credible,” ITV said.

Kambanda said in the interview, “I can’t express any regrets for something I have not done. Someone else did it.”

“Kambanda has been described as a cheerleader for genocide….now he wants to change his story,” Ray said.

“I gave weapons to the people to protect themselves,” not to murder others, he said.

Dr. Bizimana Jean Damascene, the executive secretary of the National Commission for hte Fight Against Genocide, also the former ambassador of Rwanda to the United Nations, argued in a report for Rwanda’s KT News website that the ITV story tries to “portray him as an ordinary person and not a genocidal criminal serving his sentence”.”

“The content of the article in its entirety lacks objectivity which should characterize professional journalism that otherwise should be truthfully, verifiable and not one-sided.” Further, Damascene argues the article “is a one-sided plea for the defense of the convicted genocide.”

He said, “I condemn the ongoing act” of letting convicted genocide criminals a media platform and said the interview broke prison rules.”

The agreement between the government of the Republic of Mali and the United Nations, which was signed in February 12, 1999 doesn’t allow ICTR genocide convicts to be given a platform in media to deny the crimes, which they were convicted by ICTR and for which they’re imprisoned.”

IBUKA, an organization for Rwandan genocide survivors, issued a condemnation of the interview, News of Rwanda reported. “This is very shocking and frustrating. This is a mockery to genocide victims and the survivors. We strongly denounce ITV’s actions and we need an explanation on this,” IBUKA’s president Jean Pierre Dusingizemungu said. He further suggested “someone might have paid for the interview to run.” (ITV disputed that in its statement on its website).

The Rwandan minister of justice Johnston Busingye said, according to News of Rwanda, of the interview :

“This is extremely shocking and undermining the country’s tragic history. The infamous Kambanda is a genocide convict who was at the heart of the genocide and he is known globally for that. We will never be brought down by this. We shall always fight against genocide deniers,” he said.

iMediaEthics has written to ITV, the International Criminal Tribunal for Rwanda and the Mission of Mali to the UN.