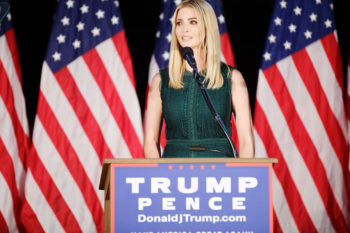 Fake news has been a major topic of discussion this month. Despite the significant attention devoted to the problem of fake stories and propaganda, it keeps circulating and, sadly, being taken for the truth. Most recently? A fake quote saying Ivanka Trump said she would Mace Donald Trump if he wasn’t her father.

While the quote was published in the Chicago Tribune in 2006, the quote originated in 2006 as part of a comedy bit by Conan O’Brien, and not from Ivanka Trump herself, iMediaEthics can confirm.

iMediaEthics contacted Conan O’Brien’s show at TBS (in 2006, he was with NBC). “We don’t have the footage but she never said that, it is from a monologue joke,” the Conan show’s Drew Shane told iMediaEthics.

The Chicago Tribune published it in an Aug. 24 roundup of “quotables.” According to Esquire, the Tribune ran it assuming it was real. iMediaEthics contacted the Tribune to see if the newspaper was running a correction or could clarify the allegations the fake quote was published as real.

The Tribune‘s editorial page editor, John P. McCormick, told iMediaEthics by e-mail, “We’re looking into the Ivanka Trump item from 2006. As with all our content: If we determine the item was mistaken, we’ll correct or clarify it for readers.” McCormick told iMediaEthics this afternoon that the Tribune is adding this editor’s note to the archive:

“Editor’s note: In November 2016, questions were raised about whether Ivanka Trump said the quote attributed to her in this “quotables” collection originally published in the Chicago Tribune on Aug. 24, 2006, and repeated in a Year in Review feature published on Dec. 31, 2006. Ten years after publication, the Tribune was unable to identify the original source of the quote or verify it as authentic.”

The fake quote made its way through the media this month after reporter Sarah Kendzior tweeted it, according to Snopes. Kendzior told iMediaEthics by e-mail that we were the first outlet to contact her. She said someone had e-mailed her to tip her off to the quote, she posted a screenshot from the Chicago Tribune‘s website on her Twitter account and “that’s the extent of my involvement.”

“While I was busy investigating these issues, *many* outlets wrote stories about that Ivanka quote and put my name in their articles repeatedly,” she e-mailed iMediaEthics. “However, none of those outlets or authors were named by Snopes in their piece about the quote, which is rather curious: after all, they were the folks who actually wrote the articles. Furthermore, no one, to my knowledge, at the Chicago Tribune — the actual source of the quote — has been asked to verify or debunk the quote, which is also curious, since they could best authenticate it.” (iMediaEthics notes that we have, as mentioned above.) Kenzior later tweeted screenshots of her e-mail response to iMediaEthics.

I was finally asked for comment on the Chicago Tribune quote on Ivanka Trump. My comments (1/2) pic.twitter.com/E1hb44wlbB

Who was duped? Esquire published an editor’s note acknowledging it originally reported on the quote as real. The magazine updated its story with more information about the fake quote’s background. The editor’s note reads:

“Editors Note: This article has been updated to explain the origins of the Chicago Tribune quote. A previous version of this article incorrectly regarded the quote as real.”

Jezebel reported, “This fake quote from 2006 has gone viral, with CBS News, Esquire, the Daily Mail, the New York Daily News, and The Hill, among many others, all reporting it as fact. But it’s not entirely their fault for getting duped. The fake quote was used by a reputable news source back in 2006. It’s simply a more old-school case of Telephone by way of print newspapers. ”

CBS News appears to have deleted its story because the link goes to an error page.

Mic updated its article Nov. 25 to add doubt to the quote’s veracity. Its headline now reads “Ivanka Trump might not have said “If he wasn’t my father, I would spray him with Mace”

Salon posted an editor’s note atop its story admitting the quote was fake. That note reads, “This story was based on reporting that was later proved to be erroneous. Slate regrets the error.”

Boing Boing posted an update to its story acknowledging Snopes’ debunking and including a correction.