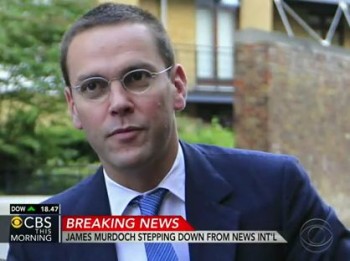 “Now that he has moved to New York, James will continue to assume a variety of essential corporate leadership mandates, with particular focus on important pay-TV businesses and broader international operations.”

Reuters noted that the statement about James Murdoch’s future role in the company doesn’t include any role in publishing. The Guardian wrote that the “move sees him give up responsibility for News Corp’s crisis-hit British newspaper operation.”

The AP described James Murdoch as the “one-time heir apparent to his father” at News Corp.  Last year, he announced the July 2011 closing of News International’s News of the World amidst growing accusations of phone hacking by the newspaper.

Murdoch’s knowledge or lack of knowledge have been questioned the past year as the phone hacking scandal has grown, we have written.  He approved a $1.1 million settlement in 2009 to Professional Footballers’ Association CEO Gordon Taylor. Taylor’s lawyers had evidence that “more than one journalist at the News of the World knew Taylor’s phone had been hacked,” Bloomberg wrote.

We wrote in July 2011 about Murdoch’s testimony to Parliament about the scandal.  Shortly after, two former News of the World employees claimed Murdoch gave bad information in his testimony because Murdoch said he didn’t know that there was evidence of widespread phone hacking.  Instead, the two former employees, former editor Colin Myler and former legal manager Tom Crone, said Murdoch did see an e-mail, referred to as “For Neville,” which had evidence of hacking.  In Murdoch’s follow-up testimony in November, he denied he knew how widespread phone hacking was at News International’s News of the World and that he didn’t know the importance of the “for Neville” e-mail, as we wrote. The Guardian’s Roy Greenslade summarized Murdoch’s follow-up testimony as admitting “there had been sins, for which he was duly sorry, but they were not his.”