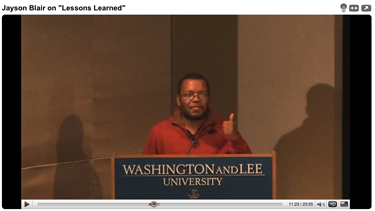 Jason Blair gives a thumbs up to Washington and Lee University students in a YouTube video of his lecture at the school. (Credit: wlunews)

After Jayson Blair spoke to students at Virginia’s Washington and Lee University this fall, many may have hoped that this would be the end of the disgraced journalist’s stint as a teacher. In its report on the event, the Roanoke Times wrote “He has said that this would be the last time he would speak publicly about his transgressions and 2003 resignation.”

But December 4, the Albany Times Union reported that despite his statements that he is reluctant to talk about his history, Blair actually went on to speak with yet another group of students this winter, this time attending a Thursday morning University at Albany class at the request of Assistant Professor Rosemary Armao.

Perhaps classroom visits don’t count as “public” speaking to Blair. The Times Union writes “[Blair] said he does not speak publicly about his own lapse in journalism ethics and that it still makes him uncomfortable to talk about it in small groups.” But this defense is moot considering that Blair seems to have also consented to an email interview with Times Union reporter Scott Waldman, who wrote about Blair’s appearance at the University December 3:

“My constant refrain is that ethical decisions rarely come in the form of big questions, that most people inch toward ethical lines one step at a time and that this can be deceiving,” Blair wrote in an e-mail interview.  Clearly, interviewing with a journalist can hardly be spun as anything other than “public” speaking.

StinkyJournalism previously argued  that a speaker who is possibly unwilling or unable (as Blair seems to be) to tell the truth is of little value to a student audience. Now it seems Blair can’t even get the truth straight in talking about why and when and how he speaks about his experience, lending more evidence to the argument that his declarations are, in general, untrustworthy.

Then there’s the issue of money. Waldman reports that at Albany Blair “refused pay for the visit, but was compensated for travel and lodging.” But for his lecture at Washington and Lee University, Blair was paid $3,000, according to K. Daniel Glover writing at Accuracy In Media.

Glover reports that Blair said he would donate his fee to the National Institute of Mental Health.

StinkyJournalism contacted the Institute to fact-check if Blair donated the money. Our investigation was stymied due to a NIMH policy explained by Budget Officer Ana Velez that all donation sources are confidential.

So how could we find out if Blair was truthful?

Velez answered that the NIMH issues acknowledgment letters to all donors, and suggested StinkyJournalism might be able to determine whether Blair actually made a donation by asking him to provide this proof.  We are contacting Blair to ask if he can show an acknowledgment letter, and to ask him about his continued appearances.