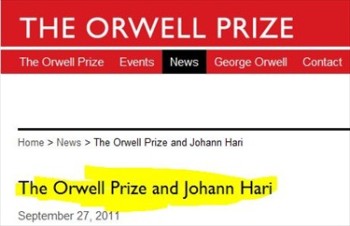 As iMediaEthics has written, Hari was accused of lifting quotes from other writers’ work in his articles.  Hari admitted that he would replace rough quotes made by interview subjects with a cleaned-up version of the quote made by the interviewee in another outlet.  Hari was suspended by the Independent in July.

Earlier this month, the Independent announced it concluded its review of Hari’s work and that Hari would take four months off from work unpaid.  During that time, Hari is to take journalism training.  Hari has also admitted that he had plagiarized in the past, as well as engaged in sock-puppetry online — that is, using fake identities to change information on Wikipedia about others.

The Prize Committee announced its charges in a statement that claims this article by Hari lifts work from Der Spiegel and features “inaccuracies.” This 2007 article from Der Spiegel appears to be the article in question.

Further, the council stated that the “the substantial use of unattributed and unacknowledged material did not meet the standards expected of Orwell prize-winning journalism.”

The statement notes that the Orwell Prize Committee conducted its own investigation into Hari’s reporting. According to the statement, the Independent’s editor didn’t respond to its questions about Hari’s work.  The statement notes that Hari decided it would call for Hari to return the prize but didn’t “announce the decision” since Hari wasn’t allowed to comment on the charges.   Read the full statement here.

Journalism.co.uk reported that the Orwell committee ” will not pursue Hari over failure to return money.” Orwell Prize director Jean Seaton is quoted as saying, “As far as we are concerned at the Prize, this is the end of the matter.”

As Journalism.co.uk noted, the prize “is jointly funded by the Media Standards Trust and journal Political Quarterly.” Because Political Quarterly provides the money and isn’t a charity, it’s “less likely to come under pressure to demand the return of the £2,000.”

iMediaEthics has written to Der Spiegel to ask if it agrees with the plagiarism charges and to see if the newspaper has any comment. We will update with any response. We are also writing the Independent for comment.